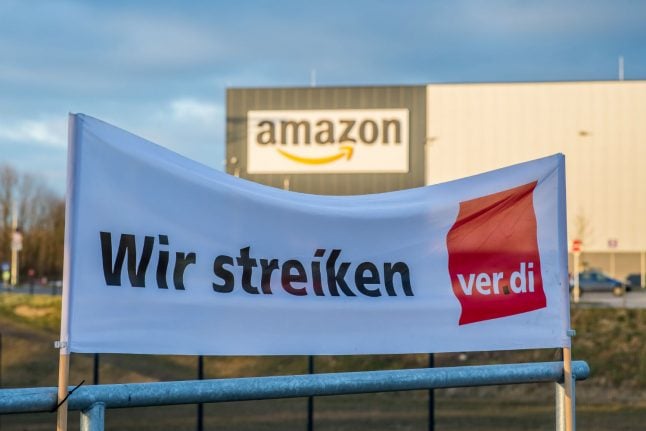 A strike at an Amazon logistics centre in Werne. Photo: DPA

Amazon deliveries are expected to spike on Tuesday, but many German employees won't be at work. Employees of the global giant in Bad Hersfeld, Leipzig, Graben, Rheinberg, Werne and Koblenz will be striking under the auspices of trade union Ver.di.

German Amazon workers have long been fighting for higher pay, paid holidays, and Christmas bonuses. Since May 2013, workers have repeatedly downed tools in an attempt to force Amazon into a legally binding collective agreement guaranteeing better conditions.

“The message is clear: While the online giant is getting richer, the health of its employees is being cast aside,” Ver.di board member Stefanie Nutzenberger told the DPA German news agency. For the past six years, the company has used Prime Day, Amazon's big annual sales day, as a time to strike.

As a result of previous strikes, says Nutzenberger, the company has improved the air ventilation and lighting in several of its warehouse locations. Wages and salaries have also been slightly on the rise, she added, and the company added a “Fruit Day” as a health initiative.

But there is still a lot of room for improvement, spokesperson Günter Isemeyer told The Local. As part of the company's demands, they would like to see Amazon provide its employees with information on workplace hazards with risk prevention, company sports, health advice through the help of external experts, and extended breaks during the day.

Amazon is rapidly expanding in Germany, with the company announcing in May that it plans to fill over 2,000 vacant positions in 2018, bringing the total number of jobs to 18,000.

Amazon did not comment on the subject of the strikes, but said that they will not affect its big annual sales event, which begins at 12 p.m. on Tuesday.

“The packages will still be arriving,” a spokesperson in Munich told DPA.

Amazon workers in Spain are also planning industrial action and will be picketing through Wednesday in front of the country’s largest packaging factory. Strikes will also be taking place in Poland, in which employees are calling for better package shipping conditions.