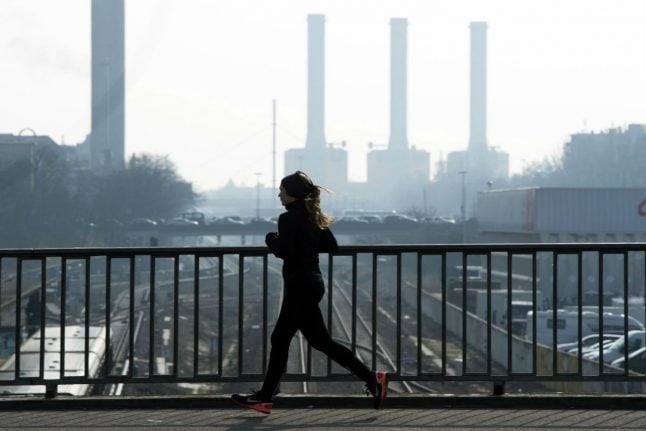 Reaching the finish line of a marathon – especially in 30 degree heat – was not something I had ever pictured myself doing, at least not before moving to the German city I would complete it in.

It might seem odd to some that I have became most inspired to train for Triathlons and 42-kilometre runs like the annual Berlin Marathon in the country of widespread beer and bratwurst, known for its fatty food habits that don’t sparkle in comparison to other EU countries.

But sports, and the sprawling spaces to practice them in, have been easily and affordably accessible to me throughout Germany, including its capital city which I have called home for over five years now. My enthusiasm, and luckily also some endurance, has continued to grow. The Berlin marathon in September 2016, in which the author was one of 41,283 runners from over 130 countries. Photo: DPA

Back in California where I grew up, team sports are pretty common as children, with many of us partaking in soccer, ahem, football teams or dabbling in basketball. Organized sports are also ubiquitous at universities, whether we do them for fun or on a sports scholarship.

But as we become older and busier, we usually put team sports on the sidelines – not to mention that there often aren’t ample opportunities for them as adults.

That’s very different in the Sportsverein culture of Germany, which embraces lacing up your tennis sneakers or kicking around a ball on your Feierabend. The Verein is simply an club of people with similar interests, in which you pay a small fee to take part.

SEE ALSO: Why every country should get on board with the German Feierabend

By the end of 2016, at least 44 percent of Germans were members of at least one Verein, with Sportsvereine topping the list, according to a survey of 6,300 of these clubs by the foundation Zivilgesellschaft in Zahlen.

There were a total of 600,000 registered Vereine this year, with most reporting growing membership. Furthermore, one in three Germans plays sports as part of a club, according to the German Sports Federation.

Having first moved to Berlin in the summer, I decided to ditch the gym for one of the many outdoor-oriented Vereine, paying a small fee for everything from organized weekly runs to kayaking in the Spree, the city’s main river. Even during a summer stay in the much-smaller Marburg, I also found no shortage of group sports for all ages.

Sports are everywhere in daily life

Many Germans, even if they don’t label themselves as an athlete, are practising a sport everyday: biking. In most of the US, riding a bike is often seen as a children’s activity, or something people do on vacation, strapping a dusty garage bike to the back of a car to ride it somewhere scenic (and free of oncoming traffic). A biker in Berlin's Tiergarten with a typically big backpack to transport things for the day. Photo: DPA

But in Berlin, I learned to embrace the bike, traversing down wide lines actually designed for two wheels rather than four. Wired magazine recently named Berlin as the 12th most bike-friendly city in the world, only slightly behind its mostly Scandinavian and Dutch forerunners. One survey estimates the number of bikes in Germany to be 62 million out of 83 million people.

Even in the wide car-friendly and nearly sidewalk-less streets of California, I was often that sole biker or pedestrian who couldn’t stomach the idea of driving half a kilometre just to pick up a few groceries.

Yet it wasn’t until I moved to Berlin that riding one became second nature, and I was among the ranks of many others who saw biking not just as a sport, but as a way to get from Point A to Point B. Many Germans had grown up riding a bike and drivers, with a few exceptions, respected sharing the road. I grew more confident cycling, and felt less trepid about a triathlon, happily speeding down the street even on a basic bike.

Be it winter or summer, swimming is also prevalent in Germany, with pools and their prices accessible for everyone. I marveled at the low cost of stopping by a swimming pool, often upwards of $20 for a drop-in visit in my city in California but here just 3.50 euros visiting after hours.

Throughout Germany, people are also exceptionally keen on swimming in lakes in warmer weather (Berlin alone has over 70 of them) – and sometimes even in the winter. Getting used to swimming in all seasons – often after a run – helped me prepare for plunging into open water during the first part of my triathlon. Swimming in the summer in a lake in Baden-Württemberg. Photo: DPA

In Germany the art of a Public Viewing is alive and well (especially in contrast to some English-speaking countries, where this term implies a funeral).

Watching the World Cup here in 2014 was unlike anything I had experienced, with TV screens projecting the game at nearly every corner for cheering (or booing, depending on the score) onlookers. Parks and Biergärten were transformed into open-air movie theatres where nearly everyone would stick around for the suspenseful finale.

Now, even with the deutsche Mannschaft not making it into the knockout stages, I have enjoyed being a part of the still-enthusiastic outdoor crowds, many of whom have recently participated in a sport themselves.