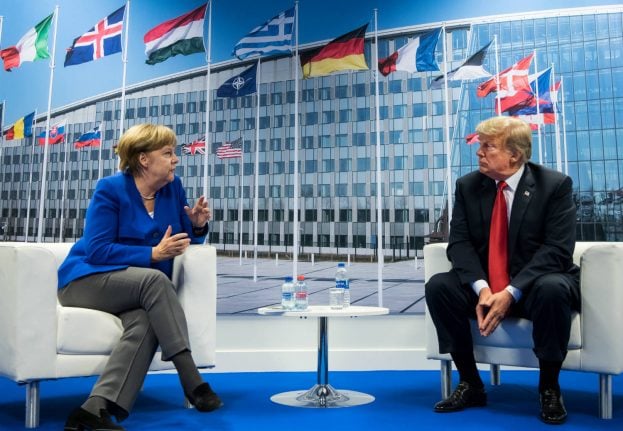 “We are having a great meeting, we are discussing military expenditure and we are talking about trade,” Trump told reporters as he met the German leader at a NATO summit in Brussels.

Trump had begun the day by attacking Merkel's government, accusing Germany of becoming “captive” to Russian interests through over-reliance on its gas exports.

As the pair met alongside the main summit, Trump confirmed he had brought up the issue of the Nord Stream 2 gas pipeline between Russia and Germany.

But Merkel nevertheless insisted Washington and Berlin remain allies, saying: “We are partners, we are good partners and wish to continue to cooperate in the future.

“I am pleased to have this opportunity to be here for this exchange of views,” she said, through a translator.

“Indeed we have an opportunity to have an exchange of our economic developments on issues such as migration and also the future of our trade relations.”

“And I believe that our trade will increase and lots of other things will increase, but we'll see what happens,” he added, before reporters were ushered out of the room.