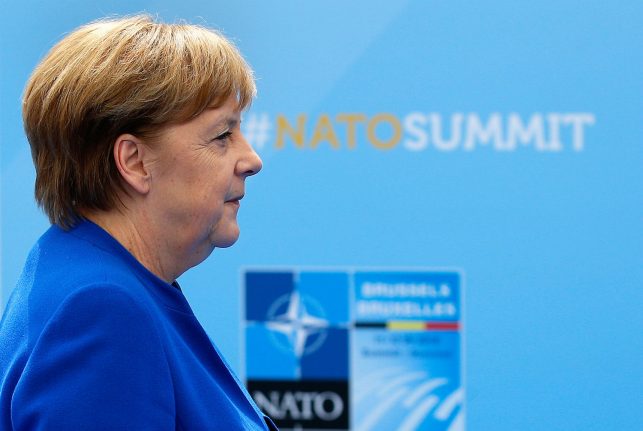 The two-day meet in Brussels was already shaping up to be the alliance's most difficult in years, with Europe and the US engaged in a bitter trade spat and Trump demanding that NATO allies “reimburse” Washington for the cost of defending the continent.

European alliance members were braced for criticism from Trump on defence spending, but his furious tirade at what should have been an amicable breakfast meeting appeared to take even NATO chief Jens Stoltenberg by surprise.

“Germany is a captive of Russia because it is getting so much of its energy from Russia,” Trump said, taking particular aim at the proposed Nord Stream II pipeline.

“I myself have also experienced a part of Germany being occupied by the Soviet Union,” Merkel, who grew up in communist East Germany, said as she arrived at a tense NATO summit.

Trump said on Wednesday that Germany was a “captive” and “controlled” by Russia because of the country's dependence on Russian gas which is set to increase with the construction of a new pipeline.

Merkel also addressed repeated criticism from Trump over Germany's military spending, which is below the target level agreed by NATO members.

“Germany owes a lot to NATO,” Merkel added. “The fact that reunification has taken place also has a great deal to do with NATO, but Germany is also doing a great deal for NATO.

“We are the second largest provider of troops, we put most of our military capabilities at the service of NATO,” she said.

NATO members agreed in 2014 to aim to raise their annual military spending to the equivalent of 2.0 percent of gross domestic product.

Figures released from NATO on Tuesday showed Europe's biggest economy spent just 1.24 percent of GDP on defence, compared with 3.5 percent for the US.

Under new plans, Germany has announced its intention to raise its defence spending by 80 percent over the next decade.

But Trump dismissed this as not enough on Wednesday morning.

“Germany is a rich country. They talk about that they can increase it a tiny bit by 2030. Well, they could increase it immediately tomorrow and have no problem. I don't think it's fair to the United States,” he added.

The meeting of 29 Western leaders has the potential to descend into another public bust-up following a divisive and bad-tempered summit of G7 nations in Canada last month.

Trump ramped up his rhetoric ahead of the talks, explicitly linking NATO with the transatlantic trade row.

“The European Union makes it impossible for our farmers and workers and companies to do business in Europe (U.S. has a $151 Billion trade deficit), and then they want us to happily defend them through NATO, and nicely pay for it. Just doesn't work!” he tweeted as he arrived in Brussels late on Tuesday.

European officials have expressed hopes that NATO members can bridge their differences but EU President Donald Tusk launched his own salvo against Trump on Tuesday.

“Dear America, appreciate your allies, after all you don't have that many,” Tusk said, before reminding Trump that European troops had come to America's aid following the September 11, 2001 attacks on the United States.

Trump will meet the Russian leader in the Finnish capital on July 16 for their first summit amid an ongoing investigation in the US into possible Trump campaign collusion with Russia.

European diplomats fear a repeat of the G7, when Trump clashed with his Western allies, withdrawing from a joint statement and calling Canadian Prime Minister Justin Trudeau “dishonest and weak” before meeting North Korean dictator Kim Jong Un at a summit afterwards and praising him as “very talented”.

There have been fears that Trump, keen to be seen to make a breakthrough with the Kremlin strongman, might make concessions that would weaken Western unity over issues such as Ukraine and Syria.

Trump set the stage for clashes at the summit by writing to around a dozen allies to berate them for lagging on a 2014 pledge to try to spend two percent of GDP on defence by 2024.

US ambassador to NATO Kay Bailey Hutchison told reporters that Trump would also recommit to one of the founding articles of NATO – Article 5 – which holds that an attack on one member is an attack on them all.