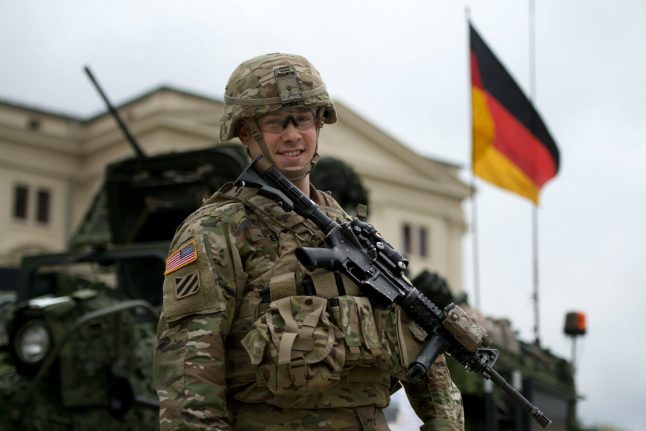 A US soldier in Dresden. Photo: DPA

The survey, carried out for DPA and published on Wednesday, showed that 42 percent of Germans would be happy if the US pulled its troops out of the Bundesrepublik. At the same time 37 percent said they want the US soldiers to stay, while 21 percent gave no answer.

In particular, voters for the far-left Die Linke and far-right Alternative for Germany wanted an end to US army bases, with 67 percent and 55 percent, respectively, saying the Amis should go. On the other hand, only 35 percent of voters for Angela Merkel’s Christian Democrats (CDU) support this.

The US troops acted as a security guarantor for West Germany during the Cold War but numbers have been drastically cut in recent years. Nonetheless, Germany is still hosts more US soldiers than any other country except Japan.

Last week a report in the Washington Post claimed that the US was considering reducing its troop numbers in Germany out of anger at Germany’s relatively low defence spending. The article suggested that the White House was considering plans to fully or partially move troops from Germany to Poland.

The White House and the US Defence department have denied the veracity of the report.

SEE ALSO: White House has no plans to pull US troops out of Germany