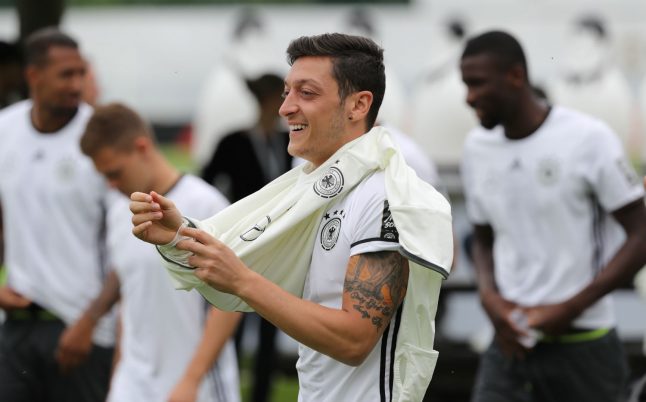 Mesut Ozil training in Switzerland for the EuroCup in 2016. Photo: DPA

Özil, 29, has come in for sharp criticism in Germany after the holders crashed out in Russia, finishing bottom of their group. Pressure had already been mounting on the Arsenal midfielder in the run-up to the tournament over a controversial photograph with Turkey President Recep Tayyip Erdogan, which sparked questions about his loyalty to Germany.

On Thursday, team boss Oliver Bierhoff suggested that perhaps Germany should have considered dropping Özil, who has Turkish roots, after his failure to explain himself over the issue.

But the midfielder's father, Mustafa Özil, in an interview with Bild am Sonntag, said: “This statement is insolent. In my opinion, it is aimed at saving one's own skin.”

Bierhoff had backtracked on Friday, saying that he “was wrong” to put Özil under undue pressure.

His failure to speak out “has disappointed many fans, because they have questions and expect answers”, Grindel told Kicker magazine in an interview to be published Monday.

“They are rightly expecting this answer. That's why it is absolutely clear to me that for his own interest, Mesut should speak out when he returns from his holidays.”

Özil senior defended his son for not clarifying his position publicly.

“He has contributed a lot for this country. It has always been: if we win, we win together.

“But when we lose, we lose because of Özil? He is now getting whistled at and made a scapegoat. I can understand if he feels insulted,” said the midfielder's father.

Mesut had agreed to have a photograph taken with Erdogan only out of “politeness” and it was never meant to be a political statement, he added.

Calling his son's treatment “unfair”, Özil senior said “he needs to decide for himself. But if I were in his place, I'd say – thanks a lot but that's it.”

“The hurt has grown too strong. And who knows what'll happen at the next match? In Mesut's place, I would step down. But that's just my very personal opinion,” he said.