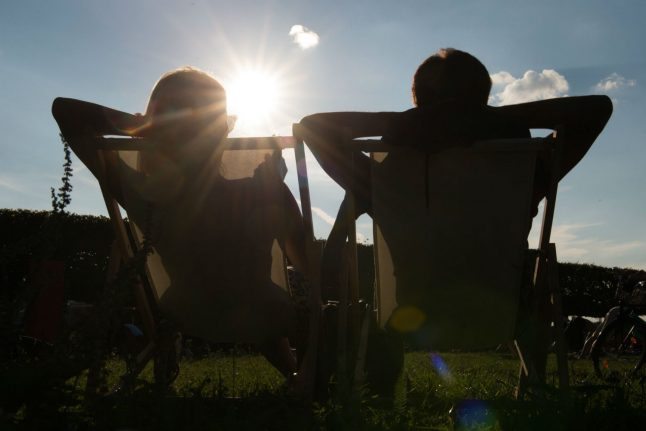 Every employee in the world looks forward to Feierabend, and yet we don't even have a word for it in English. It’s made up of two parts: Feier (a party/celebration, sounds a bit like 'fire' in English) and Abend (evening).

Feierabend doesn’t have to be late though; you’ll hear shift workers saying it to each other at any time of the day, whenever they finish working really. They say: ‘Schönen Feierabend!’ = ‘Enjoy your after-work time!’

The concept runs contrary to the common perception that Germany, Europe's largest economy, is all about work. Germany has some of the highest levels of productivity in the world, with unemployment rates at a record low of just 4.1%.

Many Germans truly however use Feierabend to disconnect from the office.  Germany’s employment ministry fully support this, recently stating in a set of labour guidelines that managers should not call or email their employees after hours.

I've found that Nacht for Germans also tends to mean tuning out – to sleep! In German it doesn’t mean 'night' in the same way English speakers use it. It is literally the time you receive some shut eye. I've lost count of the times I've received strange looks when I've asked Germans what they did last night. They usually answer with: 'I slept of course!' Best to ask if they've had a good Feierabend.

A classic German song which proclaims that it's “Finally Feierabend!”

My Feierabend are a little sketchy at the moment, at least by German standards, because I’ve been struggling to really let go. It's hard to switch off when you work freelance, or you're doing shifts, or having to finish a research project or whatever else.

So on weekdays the evening celebration rarely comes before 10pm. And when it finally arrives, it’s not so much a party as a measly fumble in the cupboard for a few raisins or almonds – it used to be chocolate but I realized I was pinning way too much joy and anticipation on sugar and had to cut down.

But really, this is not acceptable! I'm in a country with the word Feierabend, and should take that on board – as should other countries.

In 2017, the International Monetary Fund (IMF) reported that Germany’s “employment growth is strong… above potential, and the fiscal position keeps strengthening”. But Germans don't seem to be workaholics.

They value their time away from work and try to make the most of it. Most people take a proper hour-long lunch break, actually chatting with their colleagues or friends instead of constantly checking their phones. They aren't afraid to take sick days if they need them – often with the philosophy that they are doing their colleagues a favour by not constantly sneezing around them – and they enjoy their time away from the office without guilt.

They honour a work-life balance so much that 80 percent, in a recent survey, said that they don’t want anything to do with work while on holiday. Compare that with their American counterparts, only 52 percent who said that they disconnect from their professional lives while taking a trip.

I've neglected my Feierabend moments recently. But I tell you, when I do get a proper one – well, at that moment I love it. I now try and make Feierabend Friday a thing.

The techno song “Feierabend wie das duftet”, or Feierabend as it smells.

I’ve always loved Fridays. Even when I worked on weekends, there was something magical and bubbly about the end of the week that isn’t quite Saturday yet. It’s that feeling of being a bit too tired and in need of bed but so happy that you have a couple of days off in front of you that you stay up. Bleary eyed and smiling.

In previous jobs in the UK, Friday evening used to be a time when people would gather in the pub and I loved being part of it. It was kind of fun to get home at 8 or 9pm, a bit tipsy and starving. I'm talking really hungry, feeling like you’ve not eaten in days. Then you really enjoy a good meal.

The Feierabend has a different feel in Germany since going to the pub after work is not so common. I mean some people do it, but lots of punters go out much later, at around 11pm. Well, when your bars don't shut until you choose to leave and your clubs are open all the way through until Monday morning, maybe starting later on Friday is necessary…

Last summer, on one of my designated Feierabend Fridays, I met my friend Alice and we walked in the sunshine and then sat by a canal in Berlin drinking white wine from plastic cups and eating ice cream.

It seemed like the whole population of Berlin was squeezed onto the slopes next to the Landwehrkanal in Kreuzberg, observing swans love and fight each other in a series of exaggerated movements.  Watching the sun go down on a Friday night is a lovely experience to end the working week.

So as spring picks up its pace, I'm making a little pact with myself: embrace the Feierabend more. I like this idea and I think the English language should adopt it too.