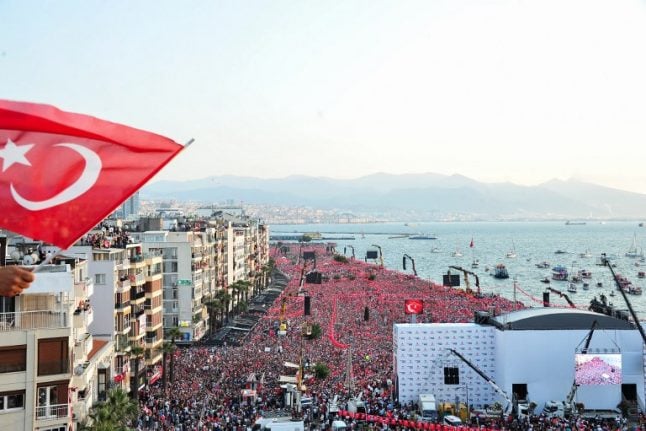 The German school is in the western city of Izmir, shown here during a rally for Turkish opposition leader Muharrem Ince ahead of the June elections. Photo: Ziya KOSEOGLU / CHP PRESS OFFICE / AFP
“A branch of the German embassy school was closed on June 28 by the regional office of the Turkish education ministry,” the embassy said in a statement.
“We call on the Turkish government to urgently explain the reasons for the closure of the school,” it added, stressing that the schools were an “essential” element of cultural and educational relations between the countries.
Berlin and Ankara have been working to normalise relations after a protracted period of tension between the Nato allies. Germany had angered Turkey with its criticism of Ankara's human rights record amid its crackdown following a 2016 failed coup.
Many European Union states have condemned the arrest of tens of thousands of people including journalists over alleged links to coup-plotters and Kurdish militants.
Turkish President Recep Tayyip Erdogan then accused EU member states including Germany of acting like Nazis when they refused to allow election rallies ahead of a referendum on constitutional changes to create an executive presidency in April 2017.
After Erdogan's decisive win in Sunday's elections, German Chancellor Angela Merkel said she looked forward to working with Turkey, especially with “a stable and pluralist Turkey in which democratic participation and rights are reinforced.”