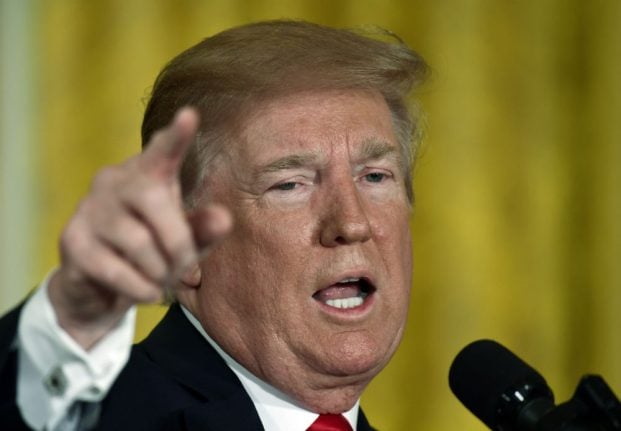 “Crime in Germany is up 10% plus (officials do not want to report these crimes) since migrants were accepted,” Trump tweeted, a day after he claimed German people were “turning against their leadership” over immigration.

“Be smart America!” said the president, who is under mounting pressure to end the separation of immigrant families on the southern US border.

While several high-profile crimes by migrants have fuelled public anger in Germany, which has admitted more than one million asylum seekers since 2015, the country's crime rate is at its lowest since 1992, according to official figures released last month.

Data from the German interior ministry does indicate that the proportion of crimes committed by foreigners has gone up in the past five years, but this cannot be attributed specifically to migrant arrivals.

On Monday, Trump tweeted that crime in Germany “is way up” as he assailed what he called a “big mistake” by Europe “in allowing millions of people in who have so strongly and violently changed their culture!”

Trump's intrusive comments have poured fuel on the fire as hardliners in German Chancellor Angela Merkel's conservative bloc gave her an ultimatum to tighten asylum rules or risk a political crisis that would rattle Europe.

The US president himself faces intensifying pressure to end migrant family separations, which are occurring as a result of a “zero tolerance” policy requiring the arrest and prosecution of anyone who crosses the border illegally.

More than 2,300 children have been taken from their parents since early May, a practice loudly decried by rights groups and US politicians from both main parties.

Trump has said he wants family separations to end, but has sought to pin blame on opposition Democrats, accusing them of blocking legislation on the broader issue of illegal immigration.

He once more defended the administration's stance on Tuesday, tweeting: “We must always arrest people coming into our Country illegally.”