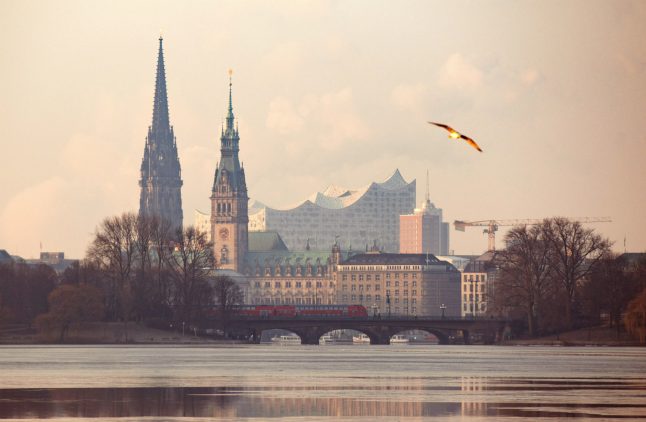 Hamburg is Germany's second largest city and is becoming more and more popular with tourists looking for a dynamic city break. We know that travelling can be expensive but we think Hamburg is too good to pass up on. So here are some free things you may not have thought about to do this summer in Hamburg.

No trip to to Hamburg can go without a visit to the city’s famous harbour. But rather than just stroll past the gigantic ships on the river front why not go a little deeper – about 24 metres deeper? The Alter Elbtunnel, also known as St. Pauli Elbe Tunnel, is a tunnel which connects St. Pauli with the south side of the Elbe river and was the first river tunnel built in Europe. Opened in 1911, the tunnel has been helping both pedestrians and vehicles cross the river for over a century. After a 426.5 metre walk you can ascend to the bank of the Elbe and enjoy a picturesque panoramic view of Hamburg’s port, St. Michael’s Church and the Elbphilharmonie. On your way to, or from, the Reeperbahn on a Sunday morning? Why not stop at the historic fish market. Don’t worry if you’re not a fan of fish, this market has changed quite a bit since 1703 when it first opened and now sells much much more. The atmosphere in this market is addictive and you will soon find yourself trying to haggle with the German vendors.

It’s worth getting to the market early to get your hands on the best produce, which also comes with the added bonus of seeing the sun rise over Hamburg and the city come to life. Grab some breakfast here and enjoy the hustle and bustle of this busy market. On Saturdays the former slaughterhouse in the Sternschanze district is transformed into a vibrant flea market. The market is partly covered so it'll be there come rain or shine. If you want to bag yourself some vintage souvenirs or just take in the scenery, the Flohschanze flea market will not disappoint. Grab a coffee or something to eat in one of the neighbouring cafes and stroll through the eclectic stalls before admiring the view of the FC St. Pauli football stadium.

Opening times: Saturdays 8am to 4pm

The University of Hamburg’s Zoological Museum is open to the public for free six days a week and is a great way to spend a rainy afternoon. The museum’s vast collection includes skeletons and models of wild animals like bears, rhinoceroses and crocodiles but also of birds and insects from all around the globe.

The museum is used for teaching and aims to put on engaging and educational displays which tackle themes such as biodiversity and evolution. Recent special exhibitions have focused on the role of humans as the biggest threat to nature in the context of population growth, species decline and climate change. A free tour in German is open to the public at 1pm on Sundays.

Opening times: Tues-Sun 9am to 5pm

Nearest stations: U Schlump, U Sternschanze

Okay this one isn’t technically free, but it’s an absolute steal and mustn’t be missed. Every Wednesday at Knust, the former slaughterhouse turned indie nightspot, they host an acoustics evening. Each week, up-and-coming musicians light up the stage with a mix of original music and covers.

While there isn't an entrance fee, a minimum donation of €5 is recommended. This is a great place to relax on a Wednesday evening with the best live acoustic music in the city and maybe even make some new friends.

The Gängeviertel, translated literally as ‘alley quarter’, is one of the most exciting places in the city. Dating back to the 19th century the Gängeviertel started out as an area where many of the city’s workers lived. A cholera epidemic broke out in the area due to the extremely unsanitary conditions the workers lived in and so the buildings in this quarter began to get torn down by the government.

With only a few buildings still standing, locals decided in 2009 to transform the area into a hub of culture, art and discussion. Today the Gängeviertel is a colourful epicentre for self-expression with impressive street art and murals covering the walls and is listed by UNESCO as an example of cultural diversity. This is really where it’s at, go explore the area and enjoy the various public exhibitions and concerts the quarter has to offer.

If you want to escape the city streets and find some beautiful scenery to relax in, here are some of Hamburg's fantastic parks:

Planten un Blomen is the green heart of Hamburg. Coming from the low German meaning ‘plants and flowers’, this urban park is a great place to spend a couple of hours. The park is made up of a number of themed gardens, ranging from the Old Botanical Garden Hamburg, to one of the biggest Japanese landscape gardens in Europe. You can even admire the beautiful flowers while relaxing in a deckchair by the water.

There’s much more on offer here than just plants and flowers though. With large play areas, a roller skating track, an ice rink, mini-golf, giant chess and trampolining available, this is the perfect place to take kids or to unleash your inner-child!

Be sure to check out the water light concert at 10pm, where artists will create a magnificent feast for the eye using water and 762 colourful spotlights, all to some fantastic music!

It’s almost unbelievable that this is all for free! And what is more, everyday the park hosts different events which are also free of charge. These range from group meditation sessions to amazing live music, be it Irish folk, jazz or pop.

Opening times: 7am to 11pm between May and September

Wilhelmsburger Inselpark (Wilhelmsburg Island Park) is a green oasis minutes away from Hamburg’s main train station by S-Bahn. Covering 85 hectares this is the perfect place to escape the city streets and spend a couple of hours relaxing. This park markets itself on the principle of equality and believes firmly in a space open for all to enjoy. There are beautiful gardens, a place to sit next to the water, a skate park and a climbing wall. You’ll forget in no time that you’re in the centre of Germany’s second largest city.

Here are some events which are taking place this summer in Hamburg:

If you’re in Germany during the World Cup head to Heiligengeistfeld to watch the games with enthusiastic locals. The screen is 100 square metres so you won’t miss anything. Or why not find a local bar to cheer Germany on.

Hamburg’s Dom Festival is the largest funfair in Northern Germany which takes up residence in Heiligengeistfeld outside the Hamburg Cathedral three times a year. This festival attracts around 10 million visitors a year. From July 27th to August 26th why don’t you go see it for yourself? Around every corner there are neon lights and the joyful screams of young children and adults rediscovering their youth as they ride on the vintage carousels and the exhilarating rollercoasters.

This is also the perfect place to peruse traditional German food, with stands offering everything from sweet and savoury snacks to full sit-down meals. Don’t miss the firework displays on Fridays at 10:30pm which can be seen throughout the city. Entrance to the festival is free and rides and attractions are offered at discounted prices.

Hamburg Pride Week is happening from 27th July to 5th August. The week will be a no-excuses party celebrating acceptance and diversity with colourful campaign pieces, a street party and demonstrations. This year’s motto is “Freie Bahn für Genderwahn” which can be translated as “Free Path for Gender Mania”. So if you’re on a budget then this party is a must! More information about individual events and locations can be found on their website.

If you're feeling adventurous here's what you can do for free just outside of Hamburg: If you’re feeling active why not take the 40-minute trip with the S1 to the Treppenviertel (literally ‘stairs quarter’). This area west of the city is postcard perfect, and you can climb the 5,000 steps to take in the breath-taking view over the Elbe river. Once you’ve come back down through the alleyways and past the mansions and greenery why not soak in some rays on the Elbe beach.

Neuengamme Concentration Camp is situated 15 kilometres southeast of Hamburg and can be reached by taking the S2 / S21 to Hamburg-Bergedorf and then bus 227 / 327 directly to camp, travel time approx. 1 hour. Neuengamme was operated by the SS from 1938 to 1945 and later served as prison for the Hamburg prison authority up until 2004. It has since been open to the public as a memorial.

A walk around the entire camp takes around 3-4 hours and there are many information plaques along the way to accompany your visit. An audio tour can be downloaded from iTunes ahead of time and can provide further information about the camp.