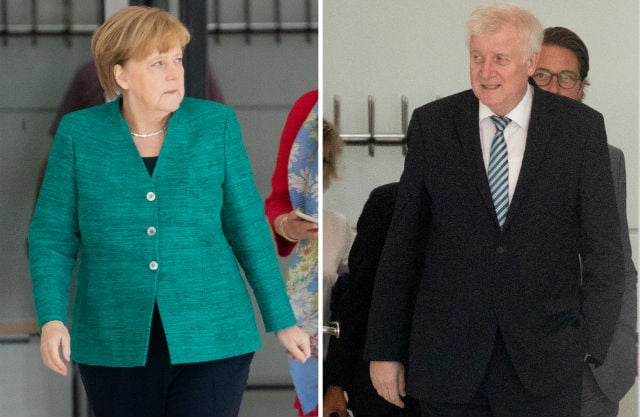 Fewer German's back Chancellor Angela Merkel than Interior Minister Horst Seehofer on the immigration question. Photo: Kay Nietfeld/dpa
The survey found that 62 percent of respondents were in favour of turning back undocumented migrants at the border, in line with the stance of Interior Minister Horst Seehofer who is openly challenging Merkel.
And 86 percent want faster deportations of rejected asylum seekers, a process now often held up by bureaucratic hurdles and legal challenges, according to the Infratest dimap poll.
The survey turns up the pressure on Merkel, who has faced a backlash for allowing into Germany more than one million people fleeing war and misery in Syria, Iraq and elsewhere since 2015.
The mass influx sparked the rise of the far-right and anti-Islam AfD party, which entered parliament last September. Merkel's welcome to refugees also infuriated Seehofer and his CSU, the sister party of her Christian Democrats in the southern state of Bavaria, which became the main entry point for most migrants.
In an unprecedented split between the CDU and CSU, Seehofer has openly defied Merkel with a demand to allow border police to turn back migrants who lack valid identity papers or are already registered in another EU country.
Seehofer also sacked Jutta Cordt, the head of the Office for Migrants and Refugees (BAMF), an interior ministry spokesman said late Friday.
The BAMF has been at the heart of a scandal around the right of asylum for several weeks, with one of its branches in Bremen, northern Germany, under investigation for allegedly favouring more than 1,200 asylum applications.
The CSU's Bavarian state premier Markus Soeder said that the ongoing “asylum tourism” meant that, as a government, “we're nearing the endgame when it comes to our credibility”.
“The people are running out of patience,” he told Bild daily.
Merkel argues that Germany must not take the sudden and unilateral step of rejecting asylum seekers at the border, which would add to the burden faced by frontline countries like Italy and Greece.
She has pledged instead to seek bilateral agreements with arrival and transit countries and a wider solution by the EU, which holds its next summit on June 28-29, while admitting that this plan is “ambitious”.
Not 'Game of Thrones'
The CSU — which faces an election threat from the AfD in October state polls — has refused to budge and set Merkel an effective ultimatum of next Monday. Seehofer will on that day seek CSU party backing to use his ministerial authority to order border police to turn back the asylum seekers, in open defiance of Merkel.
For Merkel, in power for over 12 years, the stakes could not be higher as she leads an uneasy coalition government with a narrow majority that took half a year to cobble together.
If Seehofer decides to go it alone, Merkel would have to fire him, sparking an unprecedented CDU-CSU split, political scientist Heinrich Oberreuter told business daily Handelsblatt. In that scenario, Merkel could lead a minority government with the third party in the coalition, the Social Democrats (SPD), or call fresh elections that would likely benefit only the AfD, he said.
Amid the chaos, the SPD's Finance Minister Olaf Scholz called for cool heads to prevail, tweeting that “the task of governing our country is serious and not an episode of Game of Thrones”.
French President Emmanuel Macron offered his backing to Merkel, telling reporters: “Countries are committed to the paths taken by their heads of state or government.”
“Germany also has a head of government,” he said of Merkel, saying it was she who was “responsible before her people and her parliament”.
In a sign of the frayed nerves, Germany's political and media world lurched into a brief panic Friday as several media outlets fell for a hoax tweet claiming Seehofer's CSU was quitting the coalition.
The fake news was quickly debunked as originating from satirical magazine Titanic, but not before it had been picked up by some major media, causing immediate dips in the euro and stock market.
Url copied to clipboard!