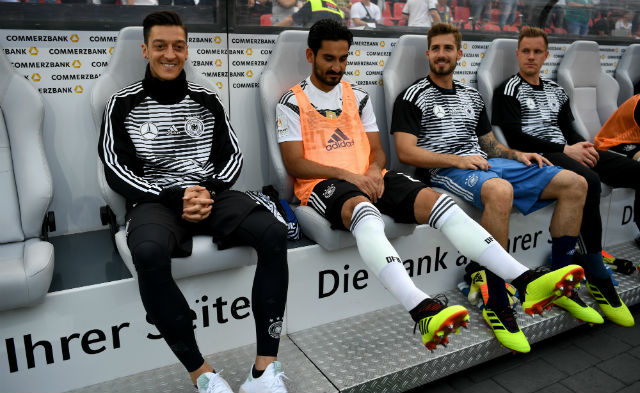 Ilkay Gündogan (centre in orange bib) has been booed from the stalls since the controversial pictures. Photo: picture alliance / Federico Gambarini / dpa
Gündogan, born in Germany to Turkish parents, filed a complaint with police after his car was damaged on the evening of June 7, the day before Germany's last warm-up game in Cologne, not far from the hotel where the team was staying.
During the match, home fans loudly booed and whistled Gundogan when he came on and every time he touched the ball as Germany beat Saudi Arabia 2-1.
On Saturday, pictures in Bild, a German tabloid, showed the right rear side window had been smashed.
Police in Cologne told the SID agency that the player had lodged a complaint, the investigation was in progress and political motivation had not been ruled out.
On May 13, Gündogan, who plays for Manchester City, and another English-based, Gelsenkirchen-born, German international of Turkish descent, Mesut Ozil, met Erdogan in London and gave him signed club shirts. Photos were then posted on social media as part of Erdogan's campaign for re-election as president of Turkey.
After that on vote, on June 24, a new system agreed in an April 2017 referendum will come into force, which the opposition says will give the president authoritarian powers.
The German football federation (DFB) responded that the two men had allowed themselves to be manipulated.
“Football and the DFB uphold values that are not entirely embraced by  Mr. Erdogan”, said the DFB.
German politicians from the far right to the Greens also criticised the players. Germany kick off their World Cup campaign against Mexico in Moscow on Sunday.