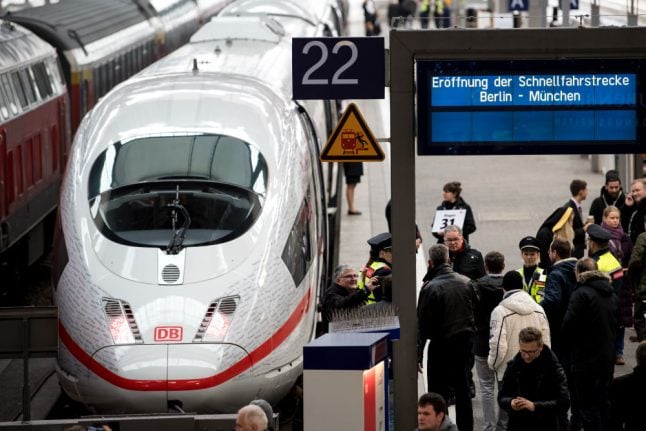 An "ICE Sprinter" train travels at speeds of up to 300 km/h. Photo: DPA

To cater to growing demand, instead of three “ICE Sprinter” trains which operate daily between the two metropolises in each direction, from December onward DB will provide five trains, said Birgit Bohle, chairwoman of DB Fernverkehr (a division of DB that operates long-distance passenger trains nationwide).

The speedy route which links Germany’s two most prominent cities takes about four hours as it makes stops at only three stations (Halle, Erfurt, Nuremberg) along the way. Regular services which stop at every station depart on an hourly basis and take a half hour longer.

Each day DB sells 15,000 tickets for the express line, according to Bohle. This means that the state-owned train operator is on track to reach its goal of doubling the number of passengers between Munich and Berlin to 3.6 million for the year as a whole.

This growth is reflected in figures from across the country. From January to April, the number of rail passengers in Germany was three percent higher than in the same period last year, DB boss Richard Lutz announced at the weekend.

A clear majority of trains – 84 percent – on the express route are moreover punctual, Bohle said. Shortly after the line opened last winter, it was hit with delays, breakdowns and cancellations.

But if DB hopes to continuously grow, it will have to keep an eye out for competitors. German startup Flixbus has applied to be allowed to introduce its low-cost “Flixtrains” between Munich and Berlin from December this year.