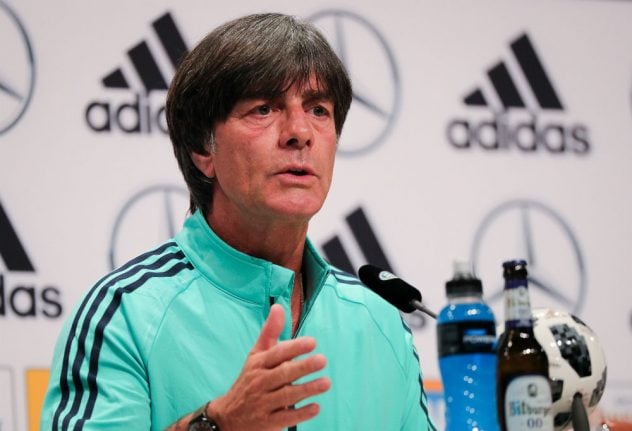 Gundogan and Ozil, who were born in Gelsenkirchen to Turkish parents, were jeered and whistled by fans during pre-World Cup friendlies after posing for a photo alongside Turkish President Recep Tayyip Erdogan.

Gundogan presented Erdogan with a Manchester City shirt signed “to my president” but said the meeting was not politically motivated, while Ozil has refused to comment.

“My job is to get both players, who have certainly suffered from this situation, in good shape,” said the head coach on Wednesday at Germany's first press conference in Russia.

“It may be that these players will still be accompanied by whistles. So be it. I wish it were otherwise. My job is to get them in the flow to help the team.”

The defending world champions play their first match against Mexico in Moscow on Sunday.

Steffen Effenberg is the latest ex-Germany international to say the pair should be thrown out of the team over the scandal.

In a bid to convince German fans they are committed to the German team, Gundogan and Ozil met Germany's President Frank-Walter Steinmeier before the World Cup and Löw asked fans to get behind the pair — so far to no avail.

The German Football Association is exasperated by the situation, which the refuses to go away in the German media.

DFB president Reinhard Grindel believes there is little more the players can do.

“If you take Ilkay Gundogan, he immediately made it clear he had made a mistake and talked to the president (Steinmeier). He has done everything he could,” said the DFB chief. “Nevertheless, he was booed.

“I think there has to be something deeper, a social-political issue, and the argument that it would all be over if Ozil voiced his stance has been refuted by the example of Gundogan.

“Now, everyone should work for Germany and give it their all. If he (Ozil) doesn't want to give an answer, then hopefully he will on the pitch.”