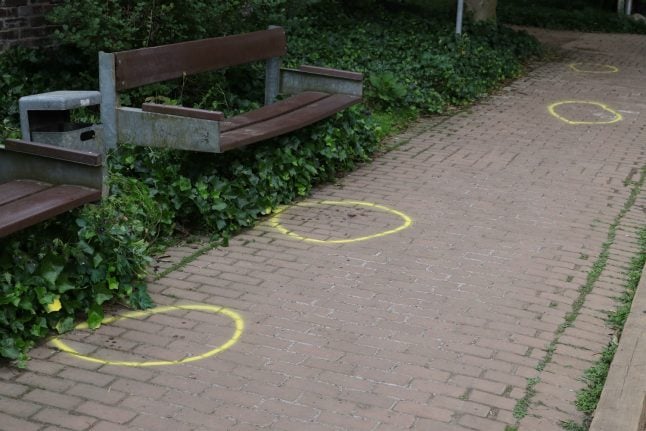 The scene of the murder in Viersen. Photo: DPA

A 17-year-old boy handed himself into police on Tuesday afternoon, as authorities searched for the killer of the teenage girl. The boy arrived at a police station in the presence of a lawyer and was immediately arrested.

According to Spiegel, the suspect and the victim knew one another. Several media outlets are reporting that the suspect is the girl's ex-boyfriend. Police have not confirmed either of the adolescents' identities.

Earlier in the day, police in Viersen released a 25-year-old man who had been held overnight in connection with the crime. The man was detained after fleeing from a police control. But he fled due to a drug-related misdemeanour, police said.

On Monday shortly after midday a 15-year-old Romanian girl was stabbed in a park in the town of 75,000 inhabitants. Bild reports that she was called Iulia R. and that she lived with her parents on the outskirts of town.

According to eyewitnesses, she collapsed as blood streamed from the wounds. A homeless man has told local media that he attempted to save her by holding her wounds together.

Emergency services arrived at the scene shortly after and rushed the teenager to hospital, but she died of her injuries shortly after.

Police then started a search in the town for the killer, whom witnesses described as being around 1.70 metres tall and “of southern appearance.” But police later said that these witness descriptions were unreliable and had led their investigations in the wrong direction. Reportedly, the people who had given statements to the police were under the influence of alcohol and had not actually seen the incident.

This is the second time within a matter of days that the body of a murdered teenage girl has been discovered in Germany.

Last week, 14-year-old Susanna F.’s body was discovered near Wiesbaden in Hesse. Police suspect that she was raped and then murdered. A young Iraqi man has admitted to the murder but denied sexual assault.

Meanwhile, several teenage girls have been the victims of knife crime over the past six months.

In December last year a 15-year-old girl was stabbed to death in a drug store in the southwest of the country. Then in March, two teenage girls, one in Flensburg and one in Berlin, were stabbed to death.

Several of the crimes appear to have been motivated by jealousy on the part of the attacker.

The fact that several of the the suspected murderers have been asylum seekers has also led to a highly contentious debate on issues such as Angela Merkel’s refugee policies and the religious and cultural backgrounds of the attackers.

The Alternative for Germany (AfD) charge that Merkel made a momentous mistake by allowing hundreds of thousands of unregistered migrants to enter the country in late 2015. In the wake of the murder of Susanna F. they have called for Merkel and her entire cabinet to resign.

But critics charge the AfD with racism for statements which appear to portray all refugees who fled to Germany as dangers to society.