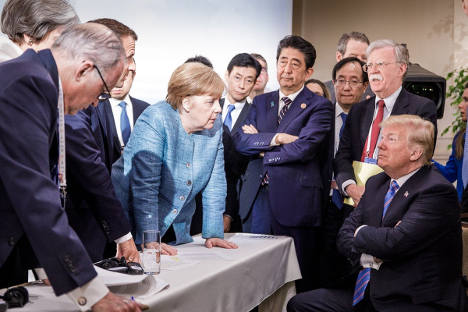 “You can destroy an incredible amount of trust very quickly in a tweet. That makes it all the more important that Europe stands together and defends its interests even more offensively,” Maas posted.

“Europe United is the answer to America First.”

Trump rejected the text of a consensus statement, traditionally a paean to shared Western values and objectives under American leadership, in angry tweets from Air Force One.

He departed early from the Quebec gathering on Saturday for a one-on-one meeting with North Korea's Kim Jong Un in Singapore.

Canadian Prime Minister Justin Trudeau had told reporters that “Canadians are polite and reasonable but we will also not be pushed around” over Trump's decision to invoke national security to justify US tariffs on steel and aluminium imports.

“Based on Justin's false statements at his news conference, and the fact that Canada is charging massive Tariffs to our US farmers, workers and companies, I have instructed our US Reps not to endorse the Communique as we look at Tariffs on automobiles flooding the US Market!” Trump tweeted in  response.

The US leader's abrupt withdrawal drew widespread condemnation on Sunday from across the German political spectrum.

“How can one hold at all worthwhile negotiations with a White House that doesn't understand the basics of the global economic order and lives in a twisted, ramshackle fantasy world?” asked a commentator in major conservative newspaper Die Welt.