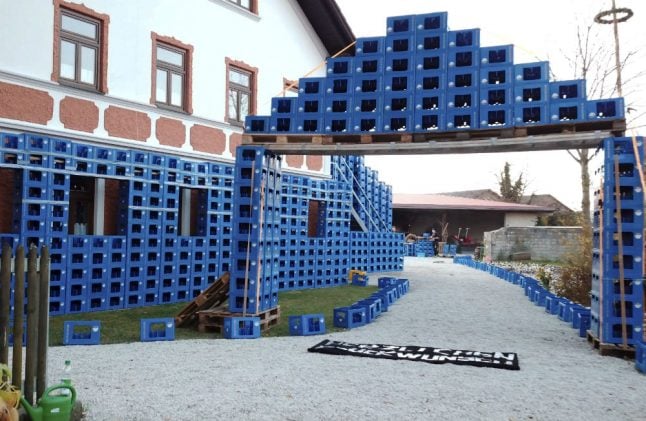 In Grasbrunn, a municipality in the district of Munich, a newly-married pair came home from their wedding celebration in November to find 1,258 crates of beer and 30,129 deposit bottles (Pfandflaschen) set up decoratively in their garden.

The couple were greeted by an archway built out of crates. Loads of crates were also stacked along the wall of the house. In the front garden, empty beer bottles covered the lawn, where some were gathered together in the shape of a heart and others spelled out the couple's names.

Georg Wagner, the groom’s friend and the one who organized the large-scale project, said that last November's initiative was intended as a prank from friends, but above all as a gift.

A Facebook video, which has already garnered over 312,000 views, shows how the massive structure was put together.

“Recently our long-time member Thomas Unterbichler got married,” the post published on Wednesday on the Grasbrunn Boys’ Association's Facebook page writes, adding that “he has absolutely earned this special and unique gift from us.”

It took the wedding guests and members of the association hours to complete the big task.

The bridal couple is believed have collected around €4,000 for the returnable bottles.

In Germany, plastic beer and soda bottles can be returned to shops for €0.25 and glass bottles for about €0.08.

Before the wedding, Wagner had collected money from guests who would be attending and exchanged it for beer bottles and crates at a local brewery.

SEE ALSO: 10 things you need to know before a German wedding