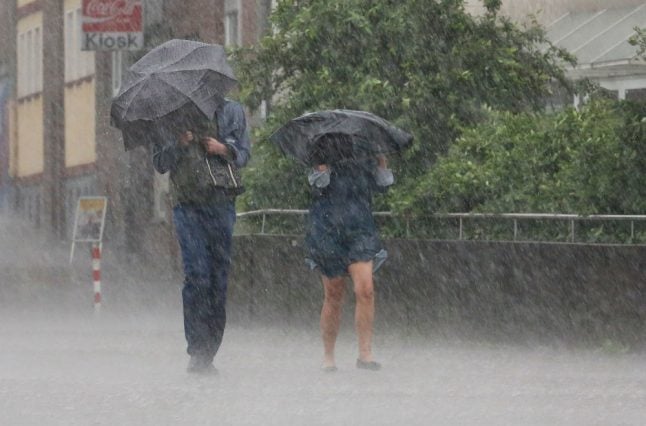 Pedestrians caught in the rain in Essen on Thursday. Photo: DPA

Following flooded streets and basements and flight cancellations in Stuttgart and Frankfurt due to the extreme weather, meteorologists at the German Weather Service (DWD) have forecast heavy rain to hit again from noon onwards.

“From midday in the south, middle and some western parts of Germany, there’s a danger of local thunderstorms and lightning,” the DWD reported on Friday.

In a short time, between 25 and 40 litres of rain per square metre could fall and some areas could see up to 60 litres per square metre, according to the DWD. There’s also the danger of hail and strong winds of up to 75 kilometres per hour.

While the thunderstorms are predicted to cease in the evening on Friday and into Saturday, the stormy weather could continue for parts of the deep south.

But the north and east of the country will largely be free of thunderstorms on Friday due to warm and dry air, the DWD added.

By the evening on Thursday the strong storms had for the most part ceased in regions across Germany.

Prior to that though flight cancellations took place at two German airports.

Check-in at Stuttgart airport was closed for hours on Thursday evening due to the violent storms.

“Within a very short time, streets, cellars and underpasses were flooded in Stuttgart,” said a spokesman for the city’s police headquarters on Friday morning. In Reutlingen, Esslingen and Mannheim, local fire brigades were called out numerous times due to reports of flooded cellars and streets.

Since the Rhine region in Hesse was also affected by the storms, no planes were able to take off and land at Frankfurt Airport in the evening. According to airport operator Fraport, about 180 flights were cancelled.

A Deutsche Bahn spokesperson said that some of the tracks in the underground area of Frankfurt's main station had to be closed due to flooding. Three out of four S-Bahn lines in the central station had to be temporarily closed.

Further regions and cities affected by Thursday's thunderstorms include the Sauerland, Ruhr and Rhineland regions in North Rhine-Westphalia as well as Munich and the Upper Bavarian and Upper Franconian regions in Bavaria.

Storms already hit some parts of western Germany on Thursday after temperatures had spiked in the mid-30s on Wednesday.

At around 4pm, gusts of 105 km/hour were recorded at the Münster-Osnabrück weather station, the German Weather Service (DWD) said.

The DWD issued a warning of severe thunderstorms for western parts of the country, particularly North Rhine-Westphalia.

They said people should expect severe conditions as well as hailstones throughout the day on Thursday.

Stormy weather on Friday too

Weather experts said more of the country is likely to experience “extreme storms” with thunder and hailstones on Friday.

Central Germany is likely to be affected most, but forecasters said it’s hard to predict exactly where the storms will hit until nearer the time.

According to a DWD meteorologist, the highest warning level (level 4) is likely to be declared in many places. “This means that there is a threat of massive damage where the thunderstorm moves,” said the Offenbach-based forecaster.

So-called supercells, which are also referred to as ‘rotating thunderstorms’, may also form.

Forecasters say the stormy weather is due to the warm and increasingly very humid air mass coming from the west.