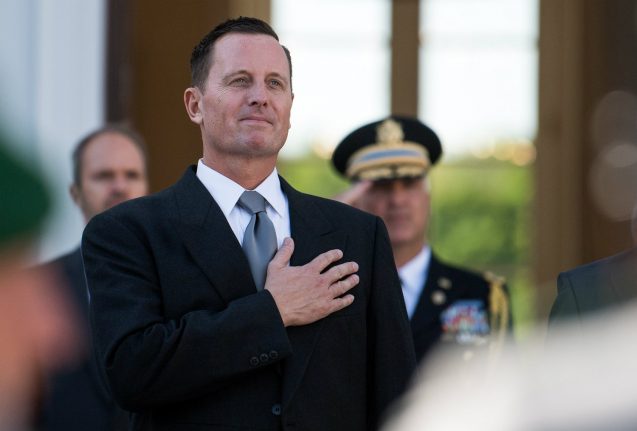 “Ambassador Grenell was unhappy with the reaction his interview has sparked,” one of the sources said after the US envoy visited the German foreign ministry.

“He especially does not want to be considered in Germany as a supporter of the forces of the right,” the source said.

“Instead, he wishes to lay the basis for close and confident cooperation with German partners.”

Grenell took up his Berlin post on May 8 and immediately irked his host country when he tweeted the same day that German companies should stop doing business with Iran after Trump quit the nuclear deal with Tehran.

He caused further outrage last weekend with reported comments to right-wing news website Breitbart of his ambition to “empower other conservatives throughout Europe, other leaders.”

Grenell also raised eyebrows with his plan to host a June 13 lunch for Austria's arch-conservative Chancellor Sebastian Kurz, described by the US envoy as a “rock star.”

For some, Grenell's comments went well beyond diplomatic convention and warranted a request for him to leave his post.   In Washington, the Trump administration backed Grenell.

“Ambassadors have a right to express their opinion,” State Department spokeswoman Heather Nauert said Tuesday when asked whether Grenell had expressed the views of the administration.

“They're representatives of the White House, whether it's this administration or other administrations, and we hear them voicing their opinions,” she said.

“And they're sometimes opinions that people may or may not like. And there is the right to free speech as well.”

The appointment of Grenell, a hawkish supporter of Trump's “America First” stance, was long held up by US senators who objected to his allegedly disparaging tweets on female politicians and apparent refusal to take

seriously claims of Russian meddling in the US election.

The controversy comes as ties between Germany and the United States are strained after Trump ditched the Iran nuclear deal and imposed punishing tariffs on European aluminium and steel.