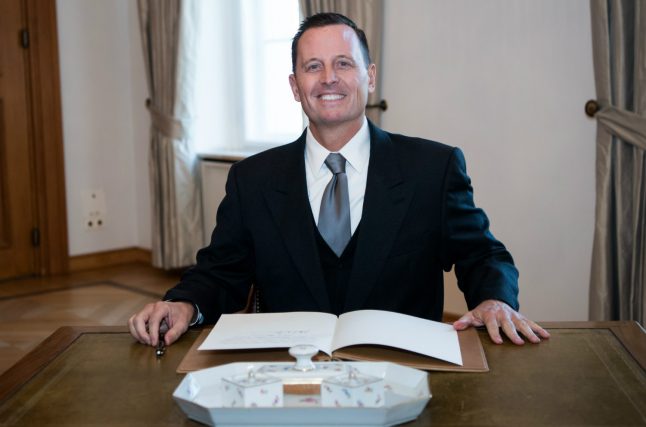 Richard Grenell was first rumoured to be Donald Trump’s preferred pick as ambassador to Berlin back in July last year.

But, the warning signs were already there when Washington politicians held up his nomination over a period of months. Democrats in the US Senate objected to his allegedly disparaging tweets on female politicians and apparent refusal to take seriously claims of Russian meddling in the US election.

Almost a year later, in early May, he finally took up the role – but it took him less than 24 hours to stir up controversy. As Trump pulled the US out of the Iran nuclear deal, the new ambassador tweeted that “German companies doing business in Iran should wind down operations immediately.”

Andrea Nahles, leader of the Social Democrats pointedly responded that, while it wasn't her role to tell diplomats how to do their jobs, “he seems to need a little bit of tutoring.”

Clearly though, Grenell never asked the SPD leader for some Nachhilfe.

At the weekend he gave an interview to the far-right news site Breitbart in which he admitted to seeing it as his goal to “empower” conservative movements in Europe. And, showing that he meant business, he invited the arch-conservative Austrian chancellor Sebastian Kurz to dinner at his Berlin residence.

Former SPD leader Martin Schulz was the most high-profile politician to publicly say that the ambassador had crossed a red line.

Schulz claimed somewhat melodramatically that “what this man is doing is unique in the history of diplomacy.”

“If the German ambassador in Washington would say that he is there to strengthen the Democrats, he would be expelled straight away,” he added.

At the same time, the US state department has backed Grenell.

A State Department spokeswoman said on Tuesday that it was not unusual for ambassadors to speak their minds.

“They're sometimes opinions that people may or may not like. And there is the right to free speech as well,” she said.

What do you think? Were Grenell's remarks a breach of diplomatic protocol the likes of which have never been seen before, or can you remember other occasions when ambassadors have spoken up on domestic politics in their host country?

And aside from the principle of it, is it really a good idea for Berlin to expel the new US envoy at a time when transatlantic ties are at their most delicate in perhaps decades?