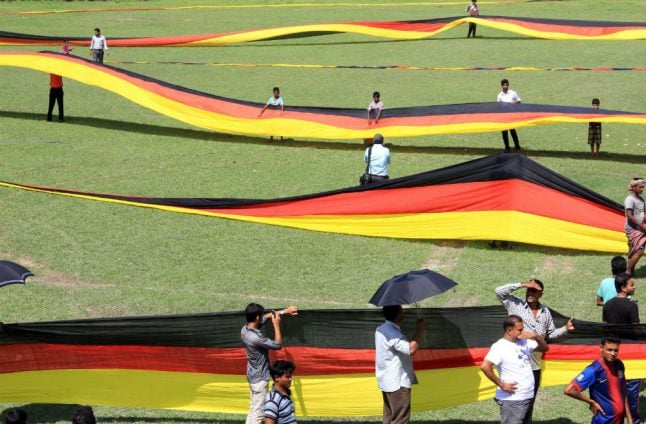 During the World Cup in 2014, Hossain's German flag was 3.5 kilometres long. Photo: DPA

Amjad Hossain's long love affair with Germany began unusually — he credited homeopathic medicine made in the European powerhouse with treating a gallbladder stone, and never looked back.

In 2006, when Germany hosted the World Cup, he started the black, red and yellow banner and has added to it every tournament since, selling another plot of farmland this year to buy enough fabric to extend the flag by another two kilometres.

The 69-year-old unveiled the lengthy tricolour with the help of dozens of volunteers at a school in Magura, southwest of the capital Dhaka, before German embassy officials and hundreds of curious onlookers.

Bangladesh is gripped by World Cup fever every four years, when its love of cricket is set aside and flags deck the streets, with Brazil and Argentina particular favourites.

If Germany advance to the second round of the World Cup, Hossain plans to use the flag to drape his local stadium in the country's colours.

“I love German football. They play beautiful football,” he said.

In 2014, Hossain's devotion was recognized by Germany's charge d'affaires in Bangladesh who made him a lifetime member of the the Mannschaft, the national side.

“We were walking along the flag for some time under a boiling sun. It was an honour,” said Kabir.

“So far we have not heard about any other flag being longer than this one. I believe right now it is possibly the longest.”