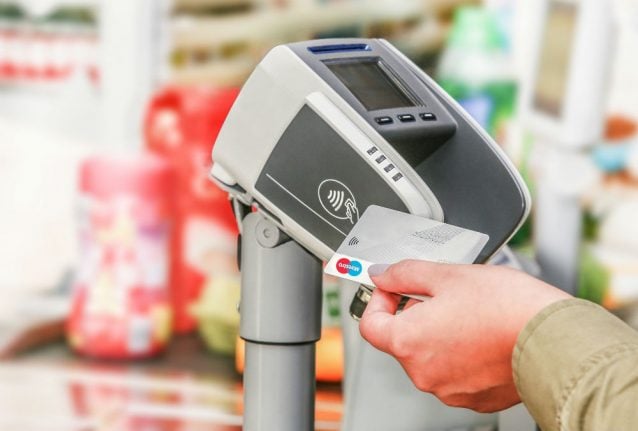 If you’ve ever been at a cashier in a German supermarket and, on top of feeling rushed to bag all your groceries speedily, you felt annoyed at having to sign a receipt or insert your PIN, you are not alone.

Despite enjoying life in Deutschland, one thing that grinds Jon Ruffell’s gears about living here is the lack of shops which accept contactless payment methods. While some stores do offer it, many do not. What’s more, it’s quite common nationwide for restaurants, bakeries and convenience stores to only accept cash.

SEE ALSO: 8 things that’ll really annoy you when you first arrive in Germany

Contactless payment is also known as “tap-and-go”. This is because it refers to a method by which consumers purchase goods or services via credit, debit or chip cards. To make a contactless payment, all a consumer needs to do is tap their card near a point-of-sale terminal.

Apple Pay, Android Pay and Google Wallet are popular yet non-traditional examples of contactless payment in that they allow consumers to use their mobile devices in lieu of contactless cards.

Since a signature or a PIN is not necessary with contactless payment, this method is considered faster and more convenient compared, for instance, to paying via cash. Whereas the technology has taken off in other countries across the globe, by comparison Germany is trailing behind.

Earlier this year the Bundesbank published a survey entitled “Payment behaviour in Germany” based on data from 2017 which revealed that Germans still prefer to pay for most of their purchases using their beloved Bargeld (cash).

The survey also found that German consumers carry around an average amount of €107 in their wallets – nearly the same as when the Bundesbank conducted the survey in 2008. In 96 percent of cases, small amounts of up to €5 were paid for using cash.

Figures from the survey moreover showed that consumers settled around three quarters of payments using banknotes and coins. Important to note though is that this was a decrease of five percent since 2014.

Part of the fondness Germans have for cash is likely due to their scepticism of more modern payment methods. An overwhelming majority of respondents, the Bundesbank states, regard cash as “an important factor in controlling personal spending and preserving anonymity.”

In spite of cash remaining king in Germany, executive board member at the Bundesbank Carl-Ludwig Thiele said that cashless forms of payment are steadily gaining ground.

According to the Bundesbank, despite their limited use overall, last year “there was an upsurge in contactless card payments which, as a share of the whole, went up for the first time to over one percent.”

If it is to become more widespread though, all credit institutions will have to issue contactless debit cards as standard and the level of acceptance among retailers will have to be improved, Thiele said.

For Axel Weiss, Head of Payments Strategy at the German Saving Banks Association (DSGV), digitization of the payments landscape will influence the preference Germans have for cash and the introduction of new payment products.

Weiss told the European Payments Council in April that he expects new technologies – including contactless payment – to increase the use of cards especially among younger people.

“I am sure that the possibility of contactless payment initiation by card or smartphone will provide a strong incentive to use electronic payments. This could increasingly replace costly cash transactions,” Weiss said.

The Bundesbank writes in the report of its survey that young consumers in particular are looking for alternatives to classic payment instruments. Some one in four respondents in the 18-24 age group, for instance, said they would like to be able to send money to friends and acquaintances using their mobile phones in a “simple, easy-to-use manner.”

READ ALSO: What is the digital German bank N26 that’s about to hit a million customers?

A consumer making a payment via a mobile phone. Photo: DPA/Vodafone

A future for contactless payment in Germany?

For now, it’s not like contactless payment doesn’t yet exist in Deutschland.

Deutsche Bank announced in April last year that its customers would be able to use their smartphones to make purchases. In doing so, the biggest bank in Germany claimed that they were the first bank to offer mobile payments in the country via an app for Android users.

Meanwhile another potential market competitor could trigger a decline in the German obsession with Bargeld.

According to unconfirmed reports, US tech giant Apple plans to introduce its own payment service in the country. If implemented, it would allow consumers to use their smartphones to pay for purchases in shops and online via stored account data.

“Apple Pay is expected to be launched in Germany this fall or winter,” German tech magazine Giga reported in April. In countries such as China, France and the US, Apple Pay is already available to consumers.

But it’s not solely up to financial services providers to determine payment behaviour, states the Bundesbank, adding that the final decision of which payment method to use is “ultimately a matter for the members of the general public in Germany.”

In this vein, it seems one of the ways of ensuring more shops in Germany accept contactless payment in future is to get more and more residents here on board with the payment method.

FOR MEMBERS: What to know about starting your personal banking in Germany