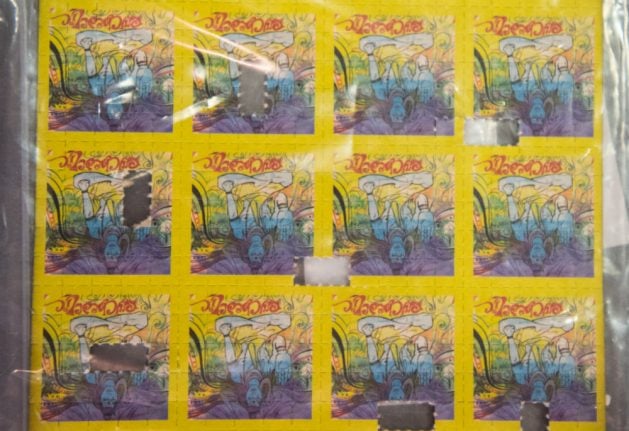 Some of the LSD tabs which were seized by the police. Photo: DPA

Some 646 kilogrammes of drugs, including a record 49,500 tabs of LSD, was confiscated by the police during a raid against a suspected international drug ring earlier this year.

“This is the biggest seizure of LSD in Germany,” said Johannes Kunz, president of the state criminal police office (LKA).

The illegal drugs, which also included ecstasy, hashish and amphetamines, were seized in two separate locations in the southwestern state of Rhineland-Palatinate in January.

Officials did not release information about the haul until now because the investigation is still ongoing, said Rolf Wissen, a spokesman for the prosecutor’s office in Koblenz.

The street value of the drugs amounts to about €9.8 million, according to prosecutors.

READ ALSO: 10 things you should know about illegal drug use in Germany

Investigations are now underway targeting eleven men and one woman between the ages of 33 and 59, all of whom are under suspicion of smuggling drugs across Europe – to and from Sweden, the UK, Belgium, the Netherlands and Norway.

Several of the suspects are currently in custody while some of them have partially confessed to the crime, investigators state. Four of the accused lived in northern Rhineland-Palatinate, said Wissen.

German investigators began looking into the case last year when Swedish customs officers noticed drugs being exchanged between the drivers of a truck and a car in May. This then led police to a couple living in a small town in northern Rhineland-Palatinate.

When drugs are seized in Germany, they are typically incinerated in waste plants after two years at the latest. Before then they are classified, weighed and stored and specialists examine them using forensic techniques.

Whether or not the drugs are incinerated depends, among other things, on if they are needed as evidence for investigations.