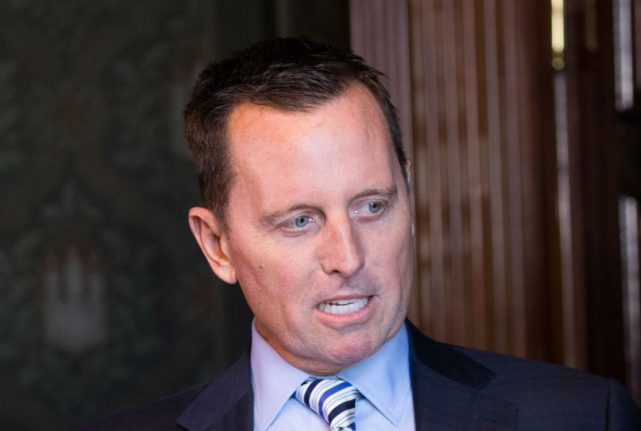 A German foreign ministry spokesman said Berlin had “asked the US side for clarification” and that its state secretary Andreas Michaelis would revisit the issue at a pre-arranged meeting with Grenell later this week.

Grenell, who took his Berlin post less than a month ago, was quoted by Breitbart London as speaking about his excitement at a “European groundswell of conservative policies” that had come because of “the failed policies of the left”.

“I absolutely want to empower other conservatives throughout Europe, other leaders,” he was quoted as saying in comments that German politicians and media judged to be unusually interventionist for a diplomat.

Social Democratic lawmaker Thorsten Schäfer-Gümbel tweeted that “European citizens don't need a Trump vassal to tell them who to vote for. A US ambassador who meddles in the democratic process to such a degree is simply misplaced”.

Grenell also reportedly told Breitbart that “the election of Donald Trump has empowered individuals and people to say that they can't just allow the political class to determine before an election takes place who's going to win and who should run”.

Grenell assumed the post in early May, which had been left vacant for 15 months, and on his first day tweeted that German companies should stop doing business with Iran — when President Donald Trump abandoned the nuclear deal with the Islamic republic.

Grenell, a 51-year-old gay former US spokesman at the United Nations and frequent commentator on conservative broadcaster Fox News, is widely seen as a hawkish supporter of Trump's “America first” stance.