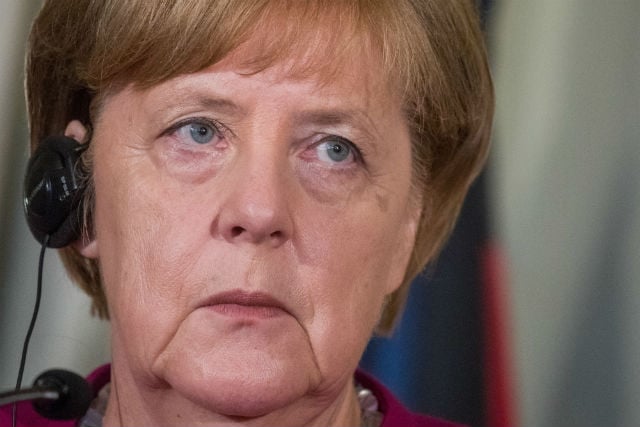 German Chancellor Angela Merkel at a press conference in Lisbon last week. Photo: Michael Kappeler/dpa
More than a year after Macron took office with the stated mission to bolster the EU and make it more responsive to its citizens, Merkel's counter-offer comes at a time of heightened concern about the future of the bloc due to political turmoil in Italy and Spain and transatlantic tensions.
Merkel told the Frankfurter Allgemeine Sonntagszeitung ahead of a crunch EU summit this month that Germany as the eurozone's top economy would support an investment budget whose total would be “at the lower end of the double-digit billions of euros range”.
She said the “rainy day fund”, as it has been dubbed, would serve to help even out economic imbalances between richer and poorer European countries “which need to catch up in the areas of science, technology and innovation”.
“We need quicker economic convergence between the member states,” she said. “To do that we have to strengthen investment capability with the help of additional structural policies,” she said, adding that the fund would be phased in gradually and then evaluated in terms of its effectiveness.
Although Merkel's budget target falls short of the range proposed by Macron, it represents a concession of sorts to his view that an excess of austerity has undermined faith in the bloc.
'Don't wait, act now'
Merkel also addressed plans to upgrade the European Stability Mechanism (ESM), which oversees bailout loans to troubled member states, such as Greece, into a European Monetary Fund.
“We aim to make ourselves a little more independent of the International Monetary Fund,” she said.
She proposed offering short-term credit lines to stricken countries, but maintained strict conditions for support: “always subject to special conditions of course, for a limited amount and with complete repayment”.
Germany and France, traditionally seen as the twin engines of European integration, plan to hold talks before the EU summit at the end of the month to coordinate their positions on reform of the bloc after Britain's exit.
The EU summit is seen as the last chance before European elections in May 2019 to get a few tangible projects on the road and demonstrate to frustrated voters Europe's ability to deliver on its promises.
Macron has repeatedly expressed impatience with what he sees as foot-dragging by Merkel, who was tied up with five months of coalition building after an inconclusive general election in September.
“Don't wait, act now,” he said as he picked up a prize in Aachen last month, urging Germany to overcome its “fetish” for budget and trade surpluses and back reforms even if it meant loosening the purse strings.
Anti-German rhetoric
Crises roiling Europe have focused minds in recent days, with a populist and eurosceptic government taking power in Italy and Spain ousting veteran Prime Minister Mariano Rajoy over a corruption scandal and his Socialist arch-rival Pedro Sanchez taking over.
Transatlantic relations have at the same time grown increasingly rocky due to a series of combative decisions by US President Donald Trump, including scrapping the 2015 Iran nuclear deal and imposing tariffs on steel and
aluminium imports.
On Italy, Merkel sounded a conciliatory tone despite the anti-German rhetoric of the governing parties, which have argued that Berlin's austerity policies have helped bring many indebted countries in southern Europe to their
knees.
She said she was “absolutely open to talking to the new Italian government about ways to help young people find work” given high levels of youth unemployment.
However Merkel, whose political power has diminished in her fourth term as her ruling majority has shrunk, insisted she would draw the line at German taxpayers assuming responsibility for other nations' debt.
“Solidarity between partners should never lead to a union of debt — it must be about helping others to help themselves,” she said.