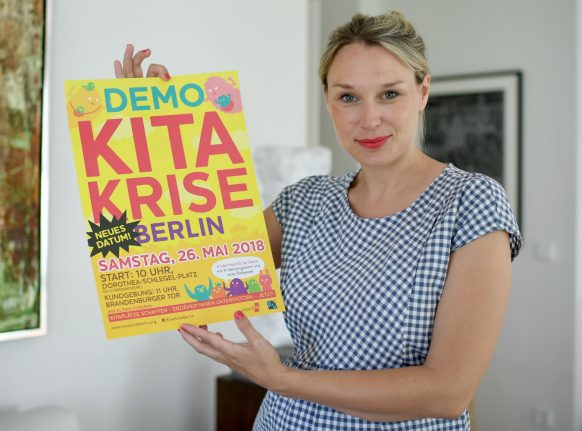 Ann-Mirja Böhm, one of the organizers of the Kita Krise demo. Photo: DPA

Elise Hanrahan should be at work today, but instead she’s standing in a Berlin café, trying to jiggle her one-year-old baby Marta to sleep.

US-born Hanrahan had intended to return to her role as a digital humanities researcher, and also begin her PhD, earlier this year when her year of maternity leave was up. But the critical lack of places in Berlin daycare centres (Kindertagesstätte, or Kita for short) has meant that parents like her have ended up off work with their kids instead.

The meetings and events Hanrahan’s office had scheduled for her return have had to be cancelled. And she can’t even tell her boss when she’ll be back.

On top of that, Hanrahan’s family is struggling to make rent. German employers are required to hold mothers’ jobs open for three years once they go on maternity leave, but after the first year maternity pay comes to an abrupt end, whether the family has secured a childcare spot or not.

“It’s really upsetting for our family,” says Hanrahan. “Not just the money that we’re losing, because I’m now on unpaid maternity leave, but also the consequences for my career. It’s significant.”

The Kita crisis has been the talk of Berlin families for months now. After hearing from other frustrated parents in a Facebook group for expat parents in Berlin, Hanrahan proposed they take action. “I decided to make a little demo,” she says. “I thought 300 people might come, that was my goal.”

Now, more than 4,000 people have registered interest in attending the demonstration, which is being organized by Hanrahan and a group of other parents under the name Kita Krise Berlin (Kita Crisis Berlin). Meanwhile, a petition started by another Berlin mother has collected 68,000 signatures.

Spokeswoman for the Senate for Education, Youth and Family Iris Brennberger says the city is currently about 2,500 Kita spots short: “that’s the difference between places that are on offer right now and children who have a Kita-Gutschein,” or document which enables a family to claim free childcare.

However, not all families apply for this voucher in advance, which means the real figure may be much higher. Brennberger says that currently there are 220,000 children aged 0-6 living in Berlin, but just 170,000 Kita places. Of course, many new babies stay at home, and children are not required to be in educational care until the age of three. But since August 2016, Berlin babies have been entitled to at least four years’ free Kita, so it is a popular choice.

On Saturday 26th May, thousands of parents, babies and their prams will march to the Brandenburg Gate to demand more Kita places. Kita Krise Berlin will also be demanding better pay and working conditions for Kita teachers, which has earned them the support of the German Education Union (GEW). One thing the union, authorities and parents all seem to agree on is that the crisis is driven by staff shortages. Some Kitas have free spaces for children, but not enough staff available to take care of them.

Parents have reported being asked to collect their children early or even keep them at home when the childcare centres are short-staffed. The instability puts a strain on working parents, but Hanrahan says it’s important to acknowledge the pressure teachers are under as well. “The teachers’ interests are our interests.”

Hanrahan says the group’s hope is that better pay and working conditions will attract more teachers to the profession and enable them to do a better job under less pressure.

“I’d heard you should start looking for a Kita before the baby is born,” says Natalie Kent, originally from the UK. “But I found that a bit ridiculous, so we didn’t do that.” Kent and her husband began applying to Kitas when their son Matteo was two months old. Six weeks out from his first birthday, they finally nabbed a Kita spot – albeit a temporary one. By then they had applied to 38 Kitas around Berlin, all documented on the Excel spreadsheet Kent used to manage the search.

Kent estimates that about 60 percent of the centres they applied to said they wouldn’t even bother putting them on a waiting list, some of which already had 100 families on them. “And then we heard that if you called on a certain day and they’d just found out that there was a spot free, then you got it,” says Kent. “Which is bad because obviously it should go to the next person on the list.”

In the end, Kent’s former employer, who runs a Kita, offered Matteo a temporary spot. So for Kent’s first months back at work, she’s been making a one-and-a-half hour zig-zag commute across the city, first to drop off Matteo and then to make it to work by 9.00am.

Originally, Kent had hoped to find Matteo a bilingual Kita, as well as something in their neighbourhood. “But we quickly learned not too be fussy.”

In August, Matteo will finally move into a permanent spot in another Kita closer to his dad’s work. This will be a disruption, but at least it will shorten the family’s commute.

As if spreadsheeting your way through your baby’s first year doesn’t sound frustrating enough, some families have begun producing CVs for their newborns, to help market them to Kitas. Kent says she saw a classified advertisement online where a family offered a €1,000 reward for finding them a Kita spot in a particular neighbourhood.

And then there’s little Lev, the Berlin baby whose parents cast him in a hilarious video where he guilt-trips Kitas into taking him, lest he resort to a life of crime. In a short-term bid to create more Kita places, the Berlin Senate for Education, Youth and Family has temporarily allowed for an increase in the ratio of children to teachers.

Long-term, the city will spend €200 million on building and establishing new Kitas. It has also doubled the number of study places for those wishing to become early childhood educators.

Additionally, Berlin’s Senator for Education, Youth and Family, Sandra Scheeres, is campaigning for a pay rise for Kita teachers.

These changes address many of the parents’ demands, but whether they can fill the existing gap quickly enough remains to be seen.

For families who don’t have the time – or language skills – to search for those elusive Kita spots, specialist agencies are offering to take on the herculean task for a fee. Not everyone is a fan of this approach: there was considerable discussion in the ExpatBabies Berlin Facebook group about whether agents should be allowed to jump into the comments to offer their services when parents post about their Kita search struggles.

Meanwhile, in Prenzlauer Berg, a coworking space called Le Box is offering childcare while you work. And for those who aren’t ready to go back to work yet – or have been forced to stay at home due to the lack of Kita spots – there’s Wunderhaus, where children are cared for while parents relax in the café, enjoy a spa treatment or participate in a workshop.

One of the most recent workshops was called ‘Let’s find your baby a Kita spot’. Places in the workshop were, of course, limited.