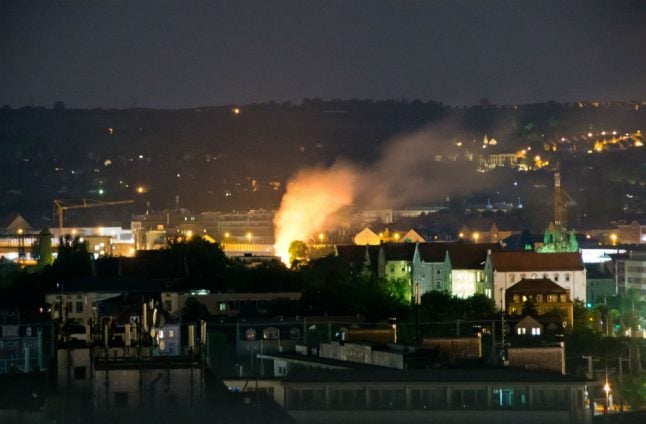 The first attempt to dispose of the bomb resulted in a fire. Photo: DPA

The operation had been complicated by a fire sparked when specialists blasted off the bomb's fuse, which had forced them to stay clear of the site for hours until the flames were extinguished.

By Thursday afternoon, an armoured backhoe could clear the smouldering rubble and confirm that the 250-kilogramme dud bomb had been safely deactivated.

Police then allowed the almost 9,000 evacuees to return to their homes in a district near Dresden's central railway station, including two elderly care homes and a hospital.

The corroded aerial bomb had been discovered during construction work Tuesday in the Saxony state capital on the Elbe river which was heavily bombed toward the end of the Second World War.

A police bomb squad managed to blast away the detonator late Wednesday, but the operation set ablaze materials that had been placed nearby to help absorb blast waves from a potentially larger detonation.

No one was injured during the defusal operation in the cordoned-off area.

More than 70 years after the end of the war, unexploded bombs are regularly found in Germany, a potentially deadly legacy of the intense Allied bombing campaign against Nazi Germany.

SEE ALSO: What to know about WWII bomb disposals in Germany