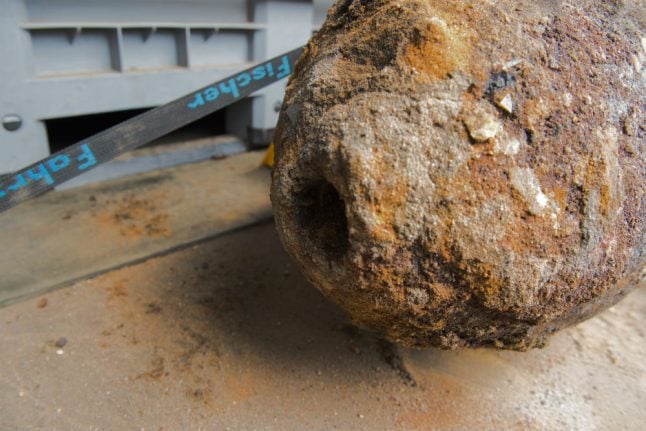 A WWII bomb found and disposed of in Dresden in April last year. Photo: DPA

“Due to extensive evacuation measures, the planned timeline could not be met,” the police in Saxony wrote on Twitter. At 9.00 am on Wednesday the police tweeted that the last people in the restricted area were being evacuated.

The bomb, which is of British origin, was discovered during construction work on Tuesday. The affected area is located in the centre of the city not far from the main train station.

About 8,700 people have been affected by the evacuation, according to the police. Residents within a 800-metre radius have had to leave their homes.

Several businesses and buildings located within the exclusion area include a senior citizens’ home, a nursing home, a vocational school, a day care centre, an allotment garden and various shops.

Dresden is well known for being almost completely destroyed during Allied bombing raids in the Second World War.

The raids are controversial because the historic capital of Saxony was not a major industrial centre, nor was it significant for German wartime production. Upwards of 22,000 people died in three nights of fire bombing of the city in February 1945.

Nowadays finding such bombs from the Second World War across Germany and disposing of them is actually quite common.

Last month in Berlin, thousands of people were evacuated after an unexploded 500-kilogramme bomb of British origin was safely disposed. The exclusion zone included the central railway station as well as a hospital and the economy ministry, among other buildings.