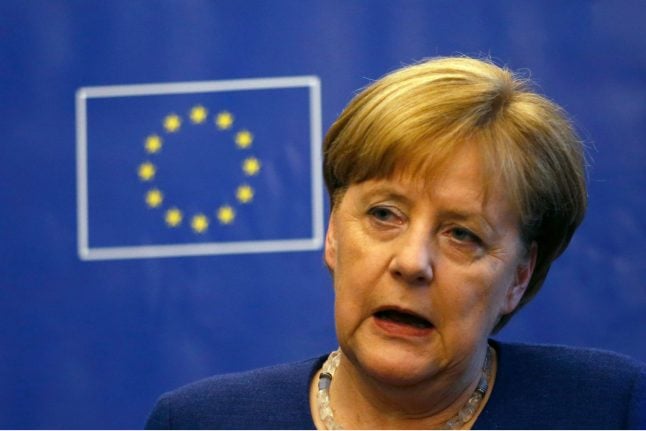 Finding a common strategy to ward off a trade war and keep markets open will be Merkel's priority when she meets with President Xi Jinping, as Washington brandishes the threat of imposing punitive tariffs on aluminium and steel imports.

“Both countries are in agreement that open markets and rules-based world trade are necessary. That's the main focus of this trip,” Merkel's spokeswoman Martina Fietz said in Berlin on Friday.

But closing ranks with Beijing against Washington risks being complicated by Saturday's deal between China and the US to hold off tit-for-tat trade measures.

China's economic health can only benefit Germany as the Asian giant is a big buyer of Made in Germany. But a deal between the US and China effectively leaves Berlin as the main target of Trump's campaign against foreign imports that he claims harm US national security.

The US leader had already singled Germany out for criticism, saying it had “taken advantage” of the US by spending less than Washington on NATO.

Underlining what is at stake, French Economy Minister Bruno Le Maire warned the US-China deal may come “at the expense of Europe if Europe is not capable of showing a firm hand”.

Nevertheless, Merkel can look to her carefully nurtured relationship with China over her 12 years as chancellor.

No Western leader has visited Beijing as often as Merkel, who will be undertaking her eleventh trip to the country.

In China, she is viewed not only as the main point of contact for Europe, but, crucially, also as a reliable interlocutor — an antithesis of the mercurial Trump.

Devoting her weekly podcast to her visit, Merkel stressed that Beijing and Berlin “are

Devoting her weekly podcast to her visit, Merkel stressed that Beijing and Berlin “are both committed to the rules of the WTO” (World Trade Organization) and want to “strengthen multilateralism”.

But she also underlined that she will press home Germany's longstanding quest for reciprocity in market access as well as the respect of intellectual property.

Ahead of her visit, Beijing fired off a rare salvo of criticism.

China's envoy to Germany, Shi Mingde, pointed to a “protectionist trend in Germany”, as he complained about toughened rules protecting German companies from foreign takeovers.

Only 0.3 percent of foreign investors in Germany stem from China while German firms have put in 80 billion euros in the Asian giant over the last three decades, he told Stuttgarter Nachrichten.

“Economic exchange cannot work as a one-way street,” he warned.

Meanwhile, looming over the battle on the trade front is another equally thorny issue — the historic Iran nuclear deal, which risks falling apart after Trump pulled the US out.

Tehran has demanded that Europe keeps the deal going by continuing economic cooperation, but the US has warned European firms of sanctions if they fail to pull out of Iran.

Merkel “hopes that China can help save the atomic deal that the US has unilaterally ditched,” said Die Welt daily.

“Because only the giant emerging economy can buy enough raw materials from Iran to give the Mullah regime an incentive to at least officially continue to not build a nuclear weapon.”

They have voiced hopes in particular that Merkel would raise the fate of Liu Xia, the widow of Nobel Laureate Liu Xiaobo, who is kept under de facto house arrest by China.

Asked if Merkel would meet with activists, her spokeswoman Fietz was non-committal, but said “as a general rule, the government and the chancellor campaign constantly for the question of human rights.”