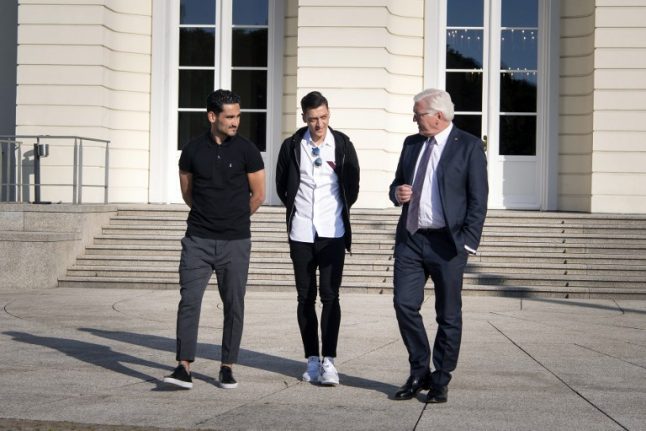 A government handout photo shows Germany President Frank-Walter Steinmeier (R) speaking with Mesut Ozil (C) and Ilkay Gundogan (L) on Saturday. Photo: Guido Bergmann / Bundesregierung / AFP
“Ilkay Gundogan and Mesut Ozil expressed a desire to visit me,” Steinmeier posted on Facebook alongside a picture of him with the Germany stars in Berlin. “It was important to both of them to clear up any misunderstandings that came up.”
Steinmeier said the players affirmed their loyalty to Germany during the meeting.
“I grew up here and I'm faithful to my country,” Gelsenkirchen-born Ozil was quoted as saying, while Gundogan added, “Germany is today clearly my country and my team”.
Arsenal star Ozil and Manchester City's Gundogan found themselves at the centre of a political storm for meeting Erdogan last Sunday during his three-day visit to Britain.
READ MORE: German or Turkish? Footballers’ meeting with Erdogan stokes identity debate
The pair each presented Erdogan with a signed Arsenal and City jersey respectively, but were criticised by both German Chancellor Angela Merkel and the German FA (DFB) for their actions.
Several German politicians slammed the pair, especially as Gundogan's shirt had 'With respect to my president' written on it, which was immediately pounced upon by Germany's political right.
“Why does Gundogan play for the German national team, if he recognises Erdogan as his president?”, tweeted AfD politician Beatrix von Storch.
DFB president Reinhard Grindel said the pair allowed themselves to be “manipulated” in Erdogan's election campaign as he seeks re-election on June 24.
Both were named in the extended 27-man World Cup squad which was announced on Tuesday as Germany head coach Joachim Loew ignored calls to drop them. Ozil and Gundogan also sat down with senior DFB officials before the German Cup final on Saturday.
“Both assured us that they did not want to send any political signal with their actions,” said Grindel. “It deserves respect and recognition that Mesut Ozil and Ilkay Gundogan personally wanted to remove the irritation. This open and honest exchange with the players was important to us at the DFB.”
Ozil won an award in 2010 for his integration work and the pair were defended by national team director Oliver Bierhoff.
“I've known both players for years and know how much they identify with the national team and our values in Germany,” said Bierhoff.
“Mesut and Ilkay continue to be good ambassadors for integration, not just because of their decision to play for Germany.”