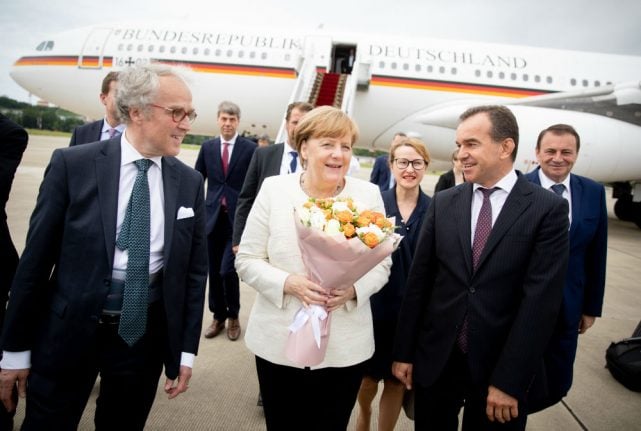 The pair's first face-to-face meeting in a year will take place less than a week before French President Emmanuel Macron is due to visit Russia.

The meeting will take place in Putin's Sochi residence and is expected to be dominated by US President Donald Trump's decision to pull out from the Iran agreement.

The fallout over the Iran deal is a rare topic for rapprochement between Europe and Moscow, whose relations are marred by disagreements over the Syria conflict, Moscow's 2014 annexation of Crimea and the subsequent war in eastern Ukraine.

These tensions have only worsened in recent months following the poisoning of former Russian spy Sergei Skripal in Britain that led to an unprecedented wave of expulsions of Russian diplomats from Western countries.

As part of the historic 2015 Iran deal, Tehran agreed to curb its nuclear programme by pledging not to seek an atomic bomb in exchange for the lifting of some international sanctions.

The Europeans now want to avoid at all costs Tehran abandoning the deal and relaunching its programme to acquire a nuclear weapon.

They also want to protect their economic interests in Iran, threatened by Washington's reintroduction of sanctions.

The Kremlin has in recent days increased its diplomatic efforts to try to maintain the agreement it described as “crucial for regional stability and for the stability of the entire world”.

Merkel's visit comes ahead of Macron's trip to Saint Petersburg on May 24th.

Putin and Merkel last met for bilateral talks in May 2017, also in Sochi.

Putin, who worked as a KGB agent in Dresden in the late 1980s, and Merkel, who grew up in East Germany, speak each other's languages.

Putin's spokesman Dmitry Peskov said the meeting was important as it was the first since both were reelected.

“In the current situation it provides a great opportunity for them to synchronize their watches on the most pressing international and regional problems, of course Syria, of course Ukraine,” Peskov told journalists ahead of the meeting on Friday.

Russia has intervened militarily to support President Bashar al-Assad regime in the Syrian conflict, who flew to Sochi to meet Putin on Thursday.

The Russian president said the “military success” in Syria allowed for a large-scale “political process” leading to the withdrawal of foreign forces and the reconstruction of the country.

On May 12th, Merkel expressed concern about the situation in Ukraine, where she said there are “violations of the truce every night and loss of life every day”.

Berlin and Moscow, along with Paris, signed peace agreements in Minsk in 2015 that aimed to put an end to a conflict that has left more than 10,000 dead since it began in April 2014.

According to Moscow, the two leaders will try to organize a four-way meeting with the presidents of France and Ukraine to advance a possible UN peacekeeping meeting. The last summit between the four countries, known as the Normandy Quartet, was held in October 2016 and was inconclusive.

“There has been a considerable pause in the work and you can expect the issue will be discussed extensively,” said Peskov.

Merkel and Putin are also expected to discuss the construction of a second Nord Stream underwater pipeline linking the two countries via the Baltic Sea, a project several EU countries oppose.

Nord Stream 2 aims to double the capacity of Nord Stream 1 by the end of 2019, and allow more Russian gas to arrive directly to Germany via the Baltic Sea, bypassing Ukraine.

The Wall Street Journal reported Friday that the US administration has increased pressure on Europe to abandon the deal in exchange for avoiding a trade war.

“The situation is quite complicated given recent statements coming from Washington,” said Peskov. “Of course that issue will have a big place on the agenda, you can be quite certain of that.”