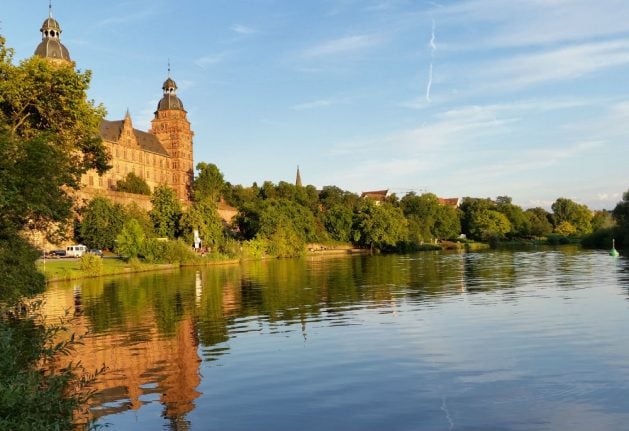 When I moved to Germany to join my husband in 2015, the country wasn’t completely new to me.

My father frequently travelled here when I was young, and I remember him bringing back typical goodies like Lebkuchen and chocolate. What I treasured most as a schoolgirl were stationery and pencils, pens and erasers of the Staedtler, Schneider or Schwan-Stabilo brand.

Decades later, as soon as I knew I’d be moving to a German town called Aschaffenburg, the only words I could use to describe my future adopted town were “it’s a little outside Frankfurt.” Due to the town’s accessibility to Frankfurt (it’s only some 50 kilometres southeast of the financial hub), this was an easier description to give people who know little of Germany’s geography.

After settling into the Bavarian town, I began to find out more about it. Located on the Main river, the town has 69,000 inhabitants and was called the “Bavarian Nice” by King Ludwig I. Nowadays the locals refer to it as Ascheberg.

Aschaffenburg’s strategic southern location in Deutschland also makes it an excellent central point to make trips to neighbouring countries and major cities. For instance, we’ve had over the past three years the opportunity to travel to nearby Austria, Belgium and the Netherlands.

Getting around within the city itself isn’t a major problem as everything’s accessible by foot. We have a shopping mall with most major brands, a high street with retail shops just like most other cities, supermarkets, plenty of parks, a cinema, etc.

Job market and a professional life

Small and medium-sized enterprises lead the local economy in Aschaffenburg but the town is still a big logistics hub and one of its prominent industries is the automobile industry.

And since it’s so close to Frankfurt, the financial industry is decent too. I think there is a good demand for IT jobs as well, presumably because the opportunities flow over from the IT hub not far south in the Mannheim-Walldorf-Heidelberg region.

It took me a little longer to find a job opportunity as I was initially looking for something in my profession, the PR and communications field. This meant that my focus was to first learn German fluently in order to be competitive.

I soon realized though that Aschaffenburg is not as  international as bigger cities like Munich or Berlin which have plenty of jobs for English speakers.

Having noticed that the demand for learning English was big in the region, I ventured into teaching English as a second language to professionals. And for a little over a year now I have been working as a Business English Trainer.

SEE ALSO: Why you should consider becoming an English teacher in Germany

Something for nature lovers

Aschaffenburg is near the heart of the Spessart mountain range and forest area and offers various activities for nature lovers and hiking enthusiasts as well as skiing options in the winter.

In the city itself, I personally cherish walking through the Schönbusch Park. The other Schöntal Park in the heart of the city, next to the mall, is also refreshing.

One of my favourite things to do is to go up to Schloss Johannisburg. Here you get a lovely view of the Main and the city from atop the palace. Afterward you can head down to the river banks and take a stroll while enjoying the waterside as well as views of the palace. On a clear sunny day, it is a beautiful sight and lovely picnic spot – both on warm, summer days and crisp, cold ones.

You don’t see as many immigrants in Ascheberg as you do in the bigger cities or university towns.

Being of Indian origin and having lived internationally throughout my life, I believe that this actually presents the best way to truly integrate into the culture and meet new people.

By visiting the local markets (Wochenmärkte) talking to local produce sellers, or by making conversation with people at bakeries and book stores, I’ve learned so much.

My first few months here though it was difficult to get by without any German. The locals for the most part only speak German, and on top of that in a difficult to understand Bayerisch accent.

After I enrolled on a Deutsch course, as I wanted to integrate as soon as possible, over time I could slowly start to speak and understand the language (though the Bayerisch dialect is still a hard nut to crack!)

It seems to me many of the foreigners here are from neighbouring European countries like Czech Republic, Poland, Italy, Romania, or even Russia rather than those we typically associate the term expat with – people from the UK, US, or Asian countries.

There is a small Asian population, namely from India and China. In 2015, Aschaffenburg was also affected by the large intake of Syrian refugees and now there are plenty of them to be seen in the city. I have noticed things are changing and I spot more expat faces now compared to when I was new here.

As such the city has supermarkets that sell authentic food products; there is a big Asian market that offers a mix of Chinese-Japanese-Thai-Indian goods, Arabic-Turkish-Syrian stores selling Middle Eastern items and a Russian-Polish store.

Unless you make a conscious effort to mingle, establishing a social life can be a little tricky. It seems people are mostly occupied with their work and family and it is somehow harder to forge friendships with the locals.

In addition, down here in Bavaria, Sunday is mostly set aside as a family day, which stems from the predominant Catholic practice of Sunday being a Ruhetag or Familientag. People are friendly, no doubt, but rather reserved – even though my husband and I speak pretty decent German.  I suppose it might be harder if one is still struggling to communicate.

SEE ALSO: How I made friends during my first year in Germany

Most of the friends that I have made are through my German classes and from other countries. I’ve also luckily had the chance to meet many people and make good friends, including locals, throughout my teaching opportunities.

As with any city, living in Aschaffenburg has its advantages and disadvantages. But I believe your experience in a German city boils down to how well you integrate into the area and whether or not you venture out of your comfort zone.