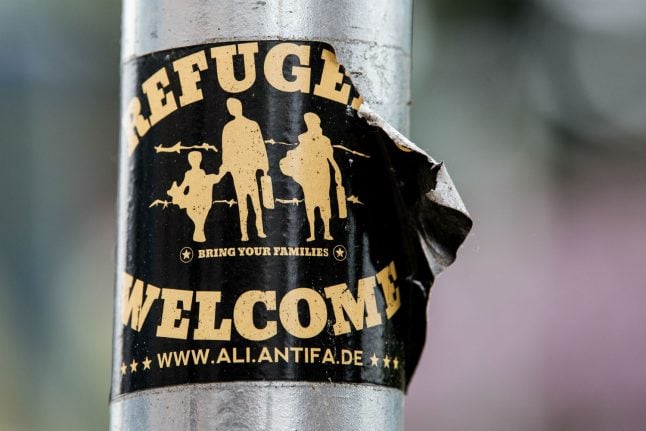 What is the debate all about?

At the start of the month, police officers in Baden-Württemberg went to an asylum centre to try and detain a young man from Togo whose application for asylum had been rejected.

But the operation ended in surprising failure when migrants at the centre surrounded the police and forced them to leave – without the Togolese man.

A couple of days later the police raided the camp in much larger numbers and arrested the man. But the incident shone a spotlight on the thorny issue of deportations of failed asylum seekers and whether German authorities are effective in their work.

The far-right Alternative for Germany, the loudest critics of the government’s refugee policies, claimed that the rule of law was crumbling as migrants were ever more willing to team up to violently prevent deportations.

On the other side of the debate, Die Linke (the Left Party) said that the case was an isolated incident that did not say anything about the general attitude of migrants to respect for the law.

“People are being criminalized here who above all were acting out of solidarity,” said Gökay Akbulut, Die Linke's spokesman on migration.

What has this got to do with lawyers?

While the case at hand had nothing to do with NGOs, conservative politicians took the opportunity to air general grievances they had about deportations (or the lack thereof).

In an interview with Bild, Alexander Dobrindt, the vocal head of the CSU in the Bundestag, decided to aim his fire at NGOs and lawyers, who he accused of holding up deportations by dragging appeals through the courts for their own profit.

Germany has an “aggressive anti-deportation industry,” the goal of which is “to intentionally sabotage the rule of law,” Dobrindt said.

He also accused pro-refugee NGOs of supporting appeals by migrants with criminal records and thus “not working for the right to asylum, but rather against societal stability.”

Does Dobrindt have a point? It is indisputable that having one's asylum request turned down in Germany in no way means that one has to leave the country. At the end of 2016 over half a million people were living in the Bundesrepublik who had been turned down for asylum.

Compared to that number, the deportation figures are tiny. In 2017, some 24,000 migrants were deported, a slight drop on the number for 2016.

There are many reasons for why people are not deported. Illnesses that can't be adequately treated at home, or the home country failing to provide identity papers are just two common reasons why a deportation cannot be carried out.

On occasion the failure to deport someone who had failed to gain asylum has been a source of major controversy. This was most notoriously the case for Anis Amri, the Tunisian terrorist who drove a truck into a Berlin Christmas market in 2016. Amri, who killed 12 people in the attack, was supposed to be deported, but Tunisia had failed to provide the necessary identity papers.

Another reason that people stay after their case has been rejected by the Federal Office for Migration and Refugees (BAMF) is that they appeal the decision in court. The courts have been overloaded with cases in recent years. By September last year there was a backlog of 283,000 cases.

At the same time, targeting the lawyers and NGOs that help migrants appeal the BAMF decision seems to be rather bizarre. One newspaper compared it to blaming divorce lawyers for the high number of marriage breakdowns.

Pro-Asyl, one of the largest pro-refugee NGOs, responded by saying it is “fundamental to the rule of law that decisions taken by state authorities can be evaluated by an independent court.”

In the political mainstream, the reaction to Dobrindt’s comment has been everything from outraged to critical. The Social Democrats (SPD), partners in the German government with the CSU, were particularly vocal.

“Talking about an anti-deportation industry is nonsense, because people who are opposed to deportations have no financial incentive,” said SPD MP Johannes Kahrs.

Kahrs accused Dobrindt of not really believing his own words, but rather engaging in a cynical ploy to win voters back from the AfD. Katrin Göring-Eckardt, the head of the Green party in the Bundestag, said that “citizens’ organizations and lawyers who check that asylum procedures have been properly implemented are the ones who are upholding the rule of law.” It was “unspeakable” of Dobrindt to “slander the work of these groups.”

Legal experts were just as quick to dismiss Dobrindt’s accusation.

“Everyone has the right to appeal a decision in our legal system,” head of the Federal Lawyers’ Association, Ulrich Schellenberg, said. “Mr Dobrindt has weakened the rule of law with his statement.”

Has anyone stood up for Dobrindt?

While the overwhelming response to Dobrindt’s comments has been negative, a few people have taken his side.

His party leader, Horst Seehofer, said that “almost every second asylum decision ends up in front of the courts – that costs time, and ties up resources.” Seehofer argued that Dobrindt was “drawing attention to the fact that asylum decision are appealed in unusually large numbers.”

For those on the left of the political debate, the reason why so many asylum decision are appealed is clear: the chances of success are relatively good. Syrians, for instance, often appeal BAMF’s decision to offer them “subsidiary protection” rather than full refugee status. Last year, the Süddeutsche Zeitung reported that four out of five court appeals by Syrians ended in their favour.

But Jan Fleischhauer, a conservative commentator at Spiegel, disputes that assumption that all migrants have a realistic chance of overturning the BAMF’s decision.

“Those who arrive from Pakistan or Nigeria have as good as no chance of winning in court, but that doesn’t stop their lawyers from trying,” he wrote on Friday.

Fleischhauer points out that asylum appeals are different from other types of court cases: even if BAMF wins the case, it still has to cover its own legal costs.

This incentivizes lawyers to test the BAMF’s decisions even in relatively hopeless cases, Fleischauer argues.

Meanwhile “the public are supplying the financial incentive. Organizations like Caritas and ProAysl have set up big donation pots which the lawyers are paid from.”