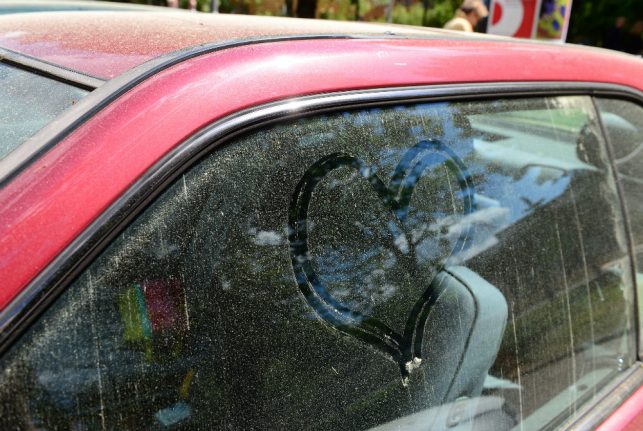 A film of Blütenstaub covers a car in Berlin. Photo: DPA

From Berlin to Stuttgart, the yellow dust has been gathering on car roofs.

A car wash in Kassel has even seen a recent influx in customers who come in hoping to rid their cars of the pesky Blütenstaub, reports the Hessische Niedersächsiche Allgemeine (HNA).

But what is the yellow stuff exactly?

Have no fear, it’s just pollen. And the reason we’ve been seeing it lately is due to a natural phenomenon that only occurs every three to seven years.

Right now spruce trees which are in bloom are in a so-called “mast year”, meaning that are producing a significantly higher amount of pollen than average – likely spurred on by the summer-like temperatures seen in Germany in April.

At the same time, other tree species, such as fir, birch, pine and beech, are currently in strong bloom due to the long winter.

Normally, tree species release pollen at different times in spring. But this season so far has been an exception as several tree populations are blooming at the same time – hence all the Blütenstaub settling on surfaces.

Motorists should take note that the pollen stays on cars until wind or rain removes it.

But experts advise against using dry rags or towels and hand wiping vehicles to get rid of the pollen as this could damage your vehicle's paintwork.

During heavy drifts of pollen, cars should be washed at least every two weeks, Volker Krause from TÜV SÜD tells the Westdeutsche Allgemeine Zeitung (WAZ).

This isn't that bad, Krause adds, stating that bird droppings left on cars can cause chemical burns after only two or three days.

As for allergy sufferers, the current pollen phenomenon is less problematic than it is for motorists; grasses and deciduous trees are more likely to give them watery eyes and runny noses.