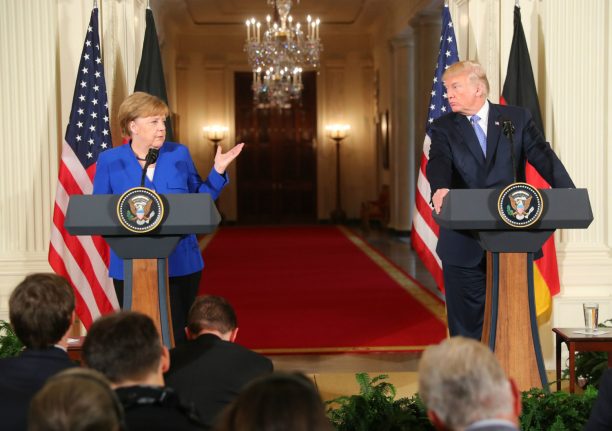 German politicans and media are outraged by Trump's announcement on the Iran deal. Photo: DPA

The USA's decision to withdraw from the Iran nuclear deal on Tuesday evening is sparking controversy throughout the world – particularly in international media.

In Germany, the Iran deal pullout was the top story on most national news sites. Across the board, German media and politicians voiced loud critique on Wednesday of the Iran nuclear deal pull-back.

Trump defied European pleas to stay in the 2015 pact, which curbs Iran's nuclear program in return for sanctions relief, and reimposed crippling sanctions which will come into effect within six months.

The decision marked a stark diplomatic defeat for Europe, whose leaders, repeatedly and in person, had begged Trump to think again.

Liberal newspaper Spiegel Online titled its leading story “Europe’s Hour” and focused on “what Germany and Europe must do now to save the Iran deal and prevent a confrontation with the USA”.

Süddeutsche Zeitung, another leading liberal outlet, claimed that Trump is “helping Iranian agitators”, and opened up a forum to its readers to poll their opinions of the Iran-deal reversal in the US. The majority of the reactions have been extremely critical.

News powerhouse Zeit Online goes as far as to call the deal the “Destruction of the liberal world order” in its lead article on Wednesday morning. The article argued that “with nationalism and protectionism, Donald Trump is gradually eliminating the world order shaped by the USA.”

Germany’s more right-leaning newspapers have reacted similarly to the White House's decision. Die Welt ran multiple stories on the decision, where they note Trump’s announcement concerning the Iran deal is a “slap in the face for Europe”.

Another leading conservative paper, the Frankfurter Allgemeine Zeitung, titles their lead article “America's risky solo run”, claiming that “Donald Trump's withdrawal from the nuclear agreement is causing international horror. Trump has the hardliners on his team behind him, but not the majority of his own people.”

German politicians are reacting in much the same way as the media by forming a united front of opposition against Trump's decision.

Leading CDU politician Jürgen Hardt, who is now a foreign policy expert for Chancellor Angela Merkel’s conservatives, told broadcaster ARD that United States had made a “grave mistake” in pulling out of the 2015 deal, and further noted that Germany should not follow the US's lead.

In an interview with Tagesschau, Foreign Minister Heiko Maas of the Social Democrats (SPD) said that he “still can't understand (the US’s decision),” but that he sees Germany’s role as keeping the deal alive without the help of America.

With regard to #JCPOA with #Iran, FM @HeikoMaas is in no doubt: “With this agreement, not only this region but the world as a whole is more secure than it would be without it.” Therefore Europe is working hard to uphold the deal: https://t.co/r14yOPhmBD

From the Greens, Bundestag chairwoman Katrin Göring-Eckardt claimed on Twitter that, “the termination of the Iran deal is a historic mistake by Donald Trump,” further calling on Germany to “save what can still be saved.”