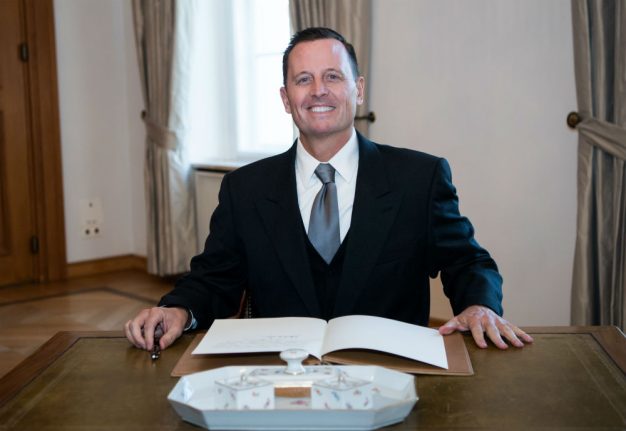 His start in Berlin came hours before Trump was to announce whether he would scrap the Iran nuclear agreement despite pleas from fellow signatories Germany, Britain and France to save it.

The 51-year-old former US spokesman at the United Nations and frequent commentator on conservative broadcaster Fox News is widely seen as a hawkish supporter of Trump's “America first” stance.

A recent cancer survivor who is openly gay, Grenell describes himself on his Twitter page with the words “I'm stronger after cancer. My dog runs my life. Imperfect follower of Christ.”

He has used Twitter to accuse Iran of “lying” about its atomic programme and argued Germany “should have joined” US, British and French missile strikes against Syria last month over its suspected chemical weapons use.

The Syria comment ruffled feathers in Germany, with Social Democratic lawmaker Nils Schmid calling it “incomprehensible” given Germany's military role in Afghanistan, Mali and other missions.

Opposition Greens party MP and foreign policy spokesman Omid Nouripour told national news agency DPA that “the new US ambassador has so far not been noted for his empathy for our interests”.

Grenell's appointment was long held up by US senators who objected to his allegedly disparaging tweets on female politicians and apparent refusal to take seriously claims of Russian meddling in the US election.

He was approved in a 56-42 vote only on the eve of Chancellor Angela Merkel's visit to Washington last week.

German President Frank-Walter Steinmeier — who received Grenell's credentials at a ceremony with military honours at Berlin's Bellevue Palace — voiced concern Sunday over a “substantial change” in trans-Atlantic ties under Trump.

The former German foreign minister mentioned Trump's “irritating Twitter messages” and charged that the current US administration “no longer sees us as part of a global community”.

Grenell, born in Michigan and a Harvard graduate, served in the US delegation at the UN under former president George W. Bush, at times with John Bolton, now Trump's national security advisor.

He founded the PR consultancy Capitol Media Partners in 2010 and also worked for several Republicans including Mitt Romney.

Grenell takes his Berlin post at a time when Trump has criticized Germany for not spending enough on common NATO defence, running a huge trade surplus, and for planning to build a new gas pipeline with Russia.

Speaking on Fox after his confirmation, Grenell struck a diplomatic tone, stressing that “we have difficult issues to work through, but we are on the same team” on values such as liberty and human rights.

On Twitter he highlighted America's “unbreakable bond with Europe”, but also stressed differences on climate policy, writing that “we just disagree on what the Paris Accord does for US taxpayers”.