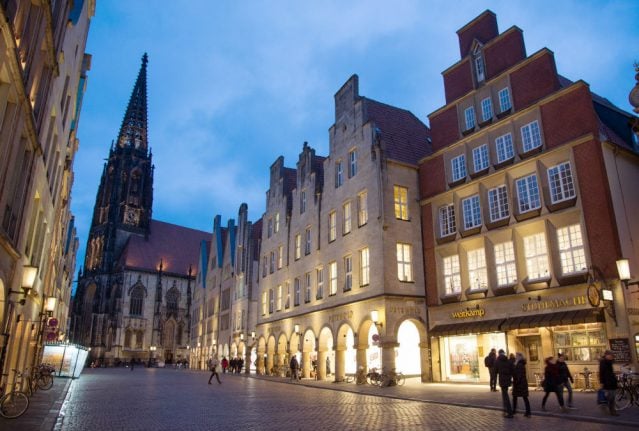 The North Rhine-Westphalian city of Münster in western Germany stands out in world history due to a particularly dark period in its past.

Back in the 1500s, a brutal rebellion took place when radicals led by a man from the Netherlands attempted to set up a sectarian state.

If you're wondering who exactly these people were, they were Anabaptists, otherwise known as “rebaptizers” – the spiritual ancestors of modern-day Baptists, Quakers, Mennonites, Hutterites and the Amish.

During the 16th century, Anabaptists were members of a sect that developed once the Catholic Church was splintered by the Protestant Reformation. They believed that one could only enter the kingdom of heaven by willingly being baptized as an adult. In 1533, against a backdrop of unrest in Europe from the Reformation, an Anabaptist man named Jan from the Dutch city of Leiden arrived in Münster to create a new kingdom for God.

Under the belief he was chosen by the all-powerful to bring a new age of peace to the continent, Jan of Leiden set off for the west German town as he had heard it was friendly to Anabaptists.

For years he had been persecuted and chased out of various villages and towns, but Münster was meant to be tolerant in terms of religion; Jan had heard that forward-thinking ideas like his own, such as pacifism and the separation of church and state were acceptable.

It didn’t take long for the Dutchman to find out his predictions were correct.

Just a few months after he got there, along with several Anabaptist mates, Jan took control of the city – though in a rather frenzied way.

Half-clothed and with religious zeal, the “rebaptizers” ran around the streets singing about the honour that awaited God’s chosen ones, promising peace and prosperity. They kicked out the city council and filled it with believers.

It didn't take long for Jan to turn the tolerant city he had arrived in into something very different. Adults who refused to be baptized were driven out in large numbers, while Anabaptists from surrounding villages flowed in to replace them.

By early 1534, a city council election had given full control to Jan of Leiden, who declared himself king. The Anabaptists began calling Münster the “New Jerusalem.”

A depiction of 1534 Münster with Jan of Leiden as king. Image: Wikimedia Commons

But not everyone was happy about this, especially the town’s bishop, Franz von Waldeck.

Having seen his town fall to the radical bunch and their reform movement, the expelled bishop who was watching it all from the outside planned to strike back.

In an effort to reestablish the Catholic Church, which had long vied with the city council for control of Münster, the bishop took his troop and foreign mercenaries and surrounded the city. By setting up huge barricades they began a siege.

As a warning to those within the city’s walls, Von Waldeck mutilated anyone who tried to break through the blockade.

Meanwhile Jan’s ideas and actions were turning ever more radical. Out of the blue, he announced to the Münsteraner that every woman of marrying age should be hitched, regardless of the fact that there were more women than men in the city.

With the polygamy declaration drawing huge backlash, in the summer of 1534 townsfolk attempted to overthrow the Anabaptists. The conspirators even managed to imprison Jan of Leiden, but the majority of the city’s residents didn’t support them and the Dutchman was eventually freed.

After the attempted putsch, the downward spiral continued. Jan and his fellow radical decided that, according to divine mandate, they could execute fellow citizens without trial.

Capital punishment for trivial offences became commonplace and the victims were for the most part women.

One of the most extreme incidents of the Münster rebellion saw Jan chop the head off of one of his sixteen wives – apparently for pointing out his extravagant lifestyle.

But, with conditions within the city walls turning grim and supplies and food dwindling, Jan and his mates couldn’t hold out for much longer.

In spring of the following year, a discontented refugee named Gresbeck led hundreds of Von Waldeck’s soldiers into town.

The forces fought their way through the narrow streets, covering the cobblestones with blood. By the time the city surrendered, 600 Anabaptists had been killed.

Jan and his two highest-ranking supporters were thrown into prison while Von Waldeck took control of the city once again, re-Catholicized it and things started to return to normal.

The rebellion was finally over. But the story doesn’t end there.

Just when you thought it couldn’t get more gruesome, the three jailed Anabaptists were brutally killed by stab wounds to the heart. But before their lives came to an end, executioners ripped flesh from their bodies with fiery tongs in front of crowds of spectators.

The mutilated bodies were placed into iron cages and hoisted from the tower of Münster's St. Lambert Church where they remained for 50 years, some say as a warning for people to know their place in society.

The three human-sized cages have been repaired and replaced several times since then, but nearly 500 years later, still hang for all to see today. Some locals question whether they’re necessary at all.

Never again would an Anabaptist group dare to launch a radical Christian reform movement similar to what Jan of Leiden and his fellow fanatics did.

Some academics argue that the actions carried out by the Anabaptists in Münster are not unlike those of terrorists today who use horrific and violent means of setting up their own state.