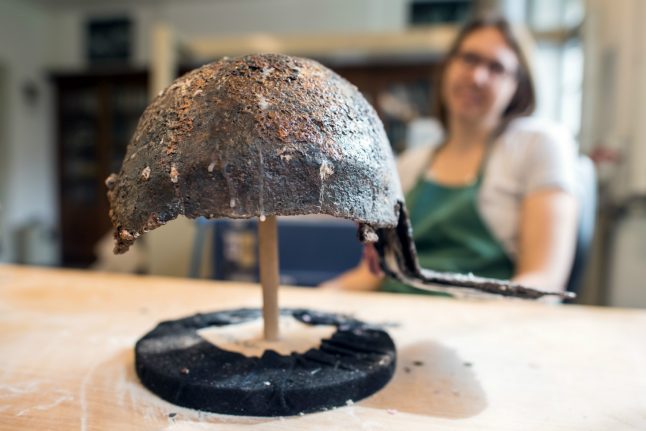 One of the ancient Roman helmets found in the recent excavation in Krefeld. Photo: DPA
Tens of thousands of artefacts were dug out of sand and clay near the Rhine, archaeologists in Krefeld announced in April.
A recent 10-month excavation along the Rhine revealed a wealth of previously-unseen Roman ruins, including hundreds of coins, weapons, horse skeletons, jewellery, helmets, and the artfully decorated belt buckle of a soldier. Packed in boxes, the relics span over 75 cubic metres.
In the small town just outside Düsseldorf, nearly 6,500 graves were found dating from between 800 BC and 800 AD, which often contained valuable burial objects. It is one of the largest ancient cemeteries north of the Alps.
“It took years before we could work through this,” said archaeologist Jennifer Morscheiser proudly, who was a member of the team that discovered the Roman artefacts.
These relics point to a part of Roman history that is tied with Germany’s Rhine-region, including a bloody uprising and subsequent Roman military presence.
READ MORE: Cologne celebrates its ancient Roman heritage
Halfway between the ancient towns of Neuss and Xanten on the Lower Rhine, the Romans established a military camp in what is now Krefeld around 69 AD.
Directly on the border of the Roman Empire, the area was chosen due to its strategic location on a small hill across from an important trade route to Germania. The Romans called the place Gelduba: Today, this district of Krefeld is called Gellep.
The famous historian Tacitus was the first to mention Gelduba, which was the scene of a massive battle between Romans and Batavians in 69 AD when Germanic Batavian prince Iulius Civilis started an uprising against the Romans in the Rhine-region.
About 20,000 men – both Romans and Batavians – fought in Gelduba.
The more than 300 horse skeletons recovered by archaeologists in recent digs likely stem from this massive battle, and are being kept in the Krefeld Museum Burg Linn as a witness to the annihilation.
According to Krefeld archaeologist Hans-Peter Schletter, these relics of the battle are something special: “This is one of the very rare cases where archaeology and historical sources are in accord.”
After the bloody slaughter, the Roman military built a military fort in the town and stayed until the beginning of the 5th century. During its time under Roman rule, Krefeld was often visited by auxiliary troops from Spain, who drank wine from their homeland and even built a heated swimming pool on the armoury's grounds.
During the most recent excavation, 30 experts, students and helpers combed 37,000 square metres for over 10 months.
The highlights of their archeological findings will be on display at the Burg Linn Museum starting in October 2019. These will include relics from both the battle and subsequent military base, such as helmets of Roman soldiers, Iron Age urns, a Roman bronze workshop or even the reconstruction of a large pottery kiln.
LEARN MORE: How the Rhine river was transformed from grotty marshland to tourist haven