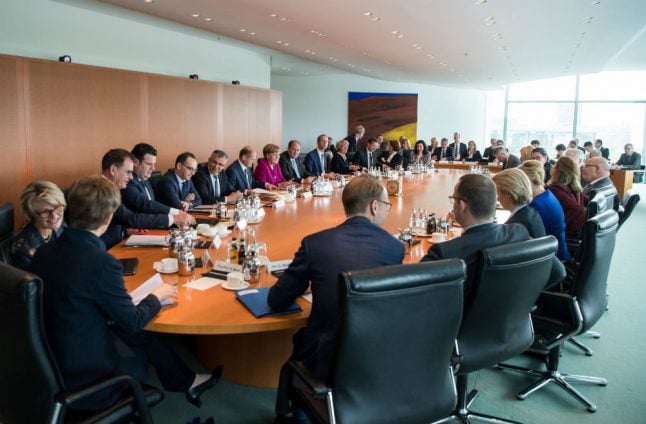 Chancellor Merkel at a meeting with her cabinet on Wednesday. Photo: DPA

With tax revenues expected to rise in coming years in step with economic growth, Finance Minister Olaf Scholz might have expected a warmer reception for plans to raise federal spending by €37 billion by 2022, to €367.7 billion.

“Germany is in a good economic and financial position today,” the Social Democratic Party (SPD) politician said, allowing him to offer a budget stuffed with extras for families, the unemployed and the education system.

Scholz even managed to sketch the increased outlays without planning to borrow any new funds — sticking to his predecessor Wolfgang Schäuble's “black zero” policy.

But Merkel's conservative ministers for defence and development were disappointed with the plans, which see only small increases in their budgets.

In a veiled criticism, Defence Minister Ursula von der Leyen of Merkel's Christian Democratic Union (CDU), called for a “solid financial basis” for the Bundeswehr (German army) immediately after the cabinet meeting that approved the new budget, suggesting more cash could still be negotiated in parliament.

Like other NATO countries, Germany promised in 2014 to lift defence spending within a decade to 2.0 percent of gross domestic product (GDP) — or around €66 billion based on last year's €3.3 trillion figure.

But Scholz's scheme includes a military funding increase to just €41.5 billion next year.

“I see no contradiction” Merkel spokesman Steffen Seibert told reporters, saying that “we have started down the path” towards the NATO goal.

Meanwhile Germany's spending on international development aid will remain short of the United Nations target of 0.7 percent of GDP.

Both budget items fail to live up to the coalition agreement between the SPD and CDU, which promised to meet the international commitments.

Berlin can also expect criticism from abroad over falling investments by the federal government from 2020 onwards.

Organizations including the International Monetary Fund (IMF) and allies from Warsaw to Washington have urged Berlin to spend more on physical infrastructure, faster internet connections or upgrading crumbling schools.

Such investments would help cut down Germany's massive trade surplus by stoking imports — helping its partners abroad — as well as laying the foundations for future growth, they argue.

The finance ministry said some of the shortfall would be made up by extra money flowing to state and municipal governments for their own investment spending.

Nevertheless, “the government should also invest significantly more in transport, digital and energy network infrastructure,” he urged, advising against any new tax cuts.