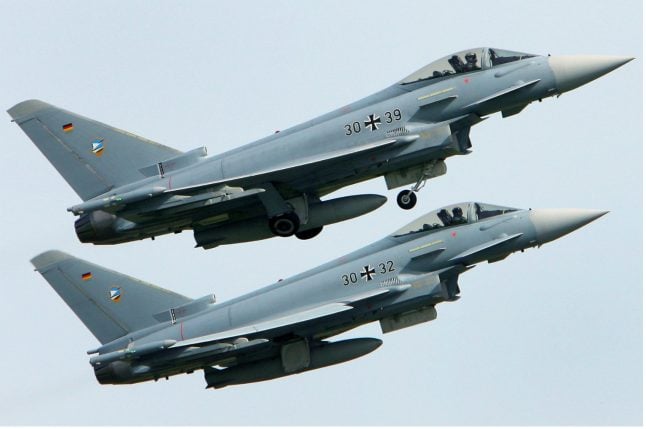 The German armed forces are once again having to fight off allegations that their forces are not fit for combat.

Only four of the Luftwaffe’s state-of-the-art Eurofighter jets could currently be called on in the event of an invasion of German airspace, according to Spiegel.

Eurofghters make up the majority of Germany’s air combat force. Theoretically the Luftwaffe has 128 of the jets ready for deployment.

But according to Spiegel a defect in the jets’ self-defence systems means that in reality only four them can be sent on mission.

The defect concerns a sensor on the jet’s wing which alerts pilots to an incoming attack. Technicians noticed a year and a half ago that the sensors were not staying cool during flights. It was then discovered that the cooling liquid had been leaking out of the pods the sensors were housed in.

Replacing the pods has not been easy though. A special seal is required to hold the liquid inside. But the company that produced the seal was sold off without the supplier informing the German Defence Ministry.

Germany has pledged to its Nato partners that it could deploy 82 Eurofighters in the event of a military crisis.

For years the Bundeswehr (German armed forces) has been dogged by allegations that its forces are not ready for real life missions.

Earlier this year a damning parliamentary report concluded that the state of the armed forces had deteriorated further in recent years.

“The army's readiness to deploy has not improved in recent years, but instead has got even worse,” Parliamentary Armed Forces Commissioner Hans-Peter Bartels said as he presented his annual findings at a press conference in February.

By the end of 2017, all Germany's submarines were in drydock for repairs, while in recent months there have been periods where none of the air force's 14 A400M transport planes were airworthy.

The report also found wider problems in Luftwaffe. Air force pilots are unable to train as their aircraft are grounded for maintenance for much of the year, the report noted.

Spending on defence has been cut repeatedly since 1990 and the end of the Cold War, leaving the army with often outdated equipment and the defence industry unable to suddenly increase production to fill the gaps.