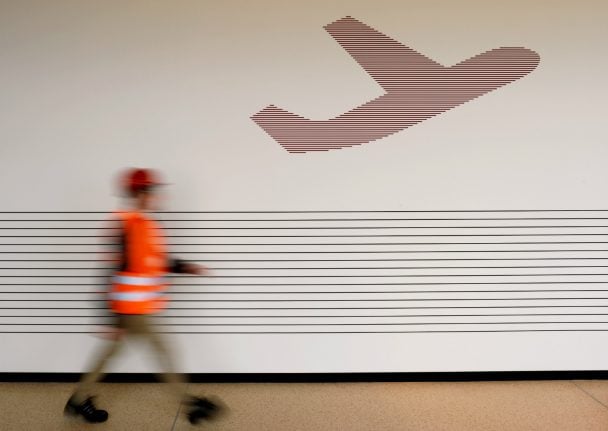 Photo: DPA
The infamous future Berlin airport BER announced its plan to build another terminal before it's opening date, with this one to process an additional six million passengers per year.
The new terminal will be built in the hopes of increasing the total capacity at the airport's opening to 28 million passengers, the Airport Association Berlin-Brandenburg announced on Wednesday.
Together with Schönefeld Airport, which will remain in operation up to the end of 2025, Berlin's airports will then be able to accommodate “a good 40 million passengers per year”, the announcement said.
“The BER will have sufficient capacity right from the start,” boasted Engelbert Lütke Daldrup, CEO of the airport.
That is, if the airport ever actually gets off the ground.
The opening of the new capital city airport, delayed by years due to numerous technical problems and mismanagement, has been the subject of ridicule in Berlin and across Germany. The air hub was supposed to open back in 2011. but the current opening date is set for October 2020.
LEARN MORE: The never-ending story: How BER airport became the laughing stock of Berlin
Officials say that it is already foreseeable that the capacity of the airport wil not be sufficient to cope with the expected demand.
The additional terminal cater to low-cost airlines by creating “optimal conditions for flying more passengers to and from Berlin,” Daldrup said.
The Airport Association announced that the new terminal will be in front of a side wing of the main terminal, and will be created according to industrial construction standards.
The building is meant to be functional rather than beautiful, reported the Association. “Overall, it is a functional building, it is not a cathedral of traffic,” noted Daldrup.
The terminal, the contract for which will be awarded this summer, should be completed in summer 2020 in time for the planned BER opening in October of the same year.
Daldrup added that the airport's expansion will continue to adapt “flexibly and modularly” to changes in future passenger numbers.
READ MORE: Chaos-plagued Berlin airport won't open before 2020