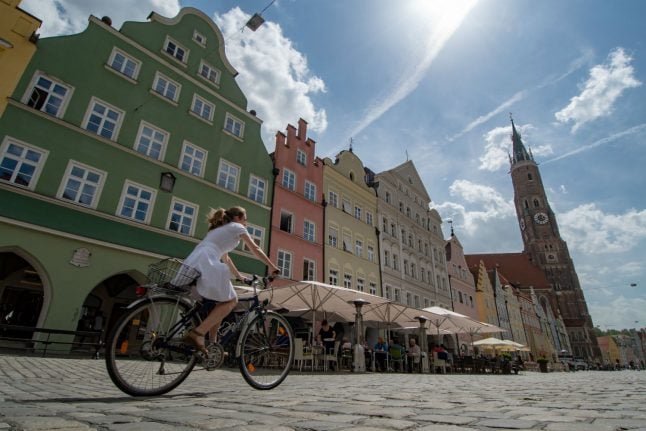 Most of the trips offer a bit of something for everyone: nature, food, athletic activity, culture, family-oriented activities. All of these locations listed can be reached by public transit from Munich between 30 mins to 2.5 hours, depending on the destination, or by car (drive times depend on traffic, but driving can be quicker to some locations).

With the location itself, it is generally easy to get around by foot or with local public transit; sometimes you can also rent bikes. If you want a fuller experience, you can always stay in one of the locations overnight and still make it back to Munich the next day with ease! Fans of the Blue Rider art movement – a contemporary art movement predominantly located in Germany – will particularly appreciate a trip to Murnau, where painters Wassily Kandinsky and Gabriele Münter shared a home that can still be visited today.

The lovely Staffelsee lake offers boat trips in summertime and scenic strolls among autumn leaves in the fall. Murnau’s charming downtown area features restaurants, a pedestrian zone and the Schlossmuseum (castle museum) of Murnau, and on a clear day you’ll have a lovely view of the mountains as you meander through the main thoroughfare.

There are also a number of relaxing and curative spas for those looking for a massage or treatment. Back in Munich, you can continue your Blue Rider tour at the wonderful Lenbachhaus museum. Picturesque and not over-touristed Eichstätt is an excellent choice for a trip just to see the beautiful town itself, which lies on the river Altmühl and has numerous old churches, monasteries and the only Catholic university in Germany.

There are many easy-to-medium hikes and walks that can be done around the surrounding hills. It’s worth a visit to the Willibaldsburg, a hill with a medieval castle and the Jura-Museum featuring a large collection of fossils and dinosaur exhibitions, including many fossils found around the valley by the river.

Quarries of Jurassic limestone found in Eichstatt have yielded some very famous fossils of ancient creatures such as the Archaeopteryx and a wide variety of prehistoric marine creatures. The stunning Schliersee lake is the main reason to pay a visit to the area; it’s perfect for swimming, walking alongside the water and taking boat rides. The Monte Mare Vitalwelt features wellness treatments, a spa and a kid’s water play area if anyone is in need of some relaxing and pampering.

Winter sports abound in the area during the snowy season, and the Wasmeier Freilichtmuseum provides a living history opportunity from blacksmithing to farming. It also provides an excellent starting point for a number of hiking trails in the pre-Alps.

At nearby Tegernsee, you can have a fresh-brewed Tegernseer beer at the local brewery, or if hard liquor is more your style, between both lakes is the Slyrs whisky distillery, at which you can take a distillery tour or enjoy a meal with a lovely view of the landscape. An easy S-Bahn commute from Munich’s city centre, Andechs provides the perfect opportunity for a leisurely, laid-back day trip hike up to the monastery where monks still brew a famous beer (since 1455) and where the noted composer Carl Orff (Carmina Burana) is buried.

It’s an ideal hike for families or people who would love to do a bit of hiking in Bavaria but aren’t up for a mountain climb, and it has a very rewarding ending at the brewery, where you can indulge in a cold Helles and a traditional Bavarian meal – perhaps some Schweinshaxe and Germknodel for dessert, if you’ve still got space in your belly? A Volksfest in Straubing. Photo: DPA

Featuring stunning Gothic architecture and one of Europe’s most noted annual jazz festivals, Straubing is an underrated gem of a town in east Bavaria. It may sound a bit strange, but the cemetery at St. Peter’s church is extremely picturesque and worth a visit – if you can arrange it advance, a private viewing of the Death’s Dance Chapel is a special sight to see.

If you have small children, Straubing has its own zoo; and if you go during August, the Gäubodenvolksfest is one of the largest folk festivals in Germany. Historically an even more important city than Munich, Augsburg sports a truly gorgeous old town centre featuring a city hall with elaborate decor and gold leaf (Goldener Saal), a cathedral founded in the 9th century, and a bell tower with fantastic views of the entire city.

If you’ve got kids in tow, don’t miss the noted Augsburger Puppenkiste, where you can see world-famous marionette theatre productions. It’s also well worth a stop at the Fuggerei, the world’s oldest social housing complex – it’s still in use today; renters must be in the lowest income bracket and be Catholic (and say a daily prayer for its founders). The rental costs to live in the Fuggerei have not changed since 1516 – today, yearly rent is equivalent to less than a euro. Best known for its every-three-years Landshuter Hochzeit (a tradition where a medieval wedding is acted out in parade form, replete with jousting tournaments and other celebrations), the town of Landshut is also an excellent day trip, with a brief travel time under an hour by train from central Munich.

It features a gorgeous town centre, Baroque churches and a particularly beautiful concert hall, the Rathausprunksaal. If you’re into ice hockey, Landshut features its own team, the (former) Landshut Cannibals (currently known only by their initials; as “Cannibals” was apparently too controversial of a name). See if you can catch a game! Located near Munich airport, Freising is very easy to access from downtown Munich and is a perfect destination both for those interested in old cathedrals and for beer lovers, as it is home to the stunning Freising romanesque basilica church with a well-preserved crypt underground, as well as the Weihenstephan brewery – the oldest continuously operating brewery in the world.

Students from all over Germany come to the technical university in Freising to study the art of brewing. Explore the church, the old town around the monastery hall, and then get lunch at the brewery restaurant (finding the right item isn’t hard – everything’s guaranteed to go well with the beer!).

LIVING IN GERMANY
Five of Germany’s most magical Christmas Markets to visit in 2021
Url copied to clipboard!