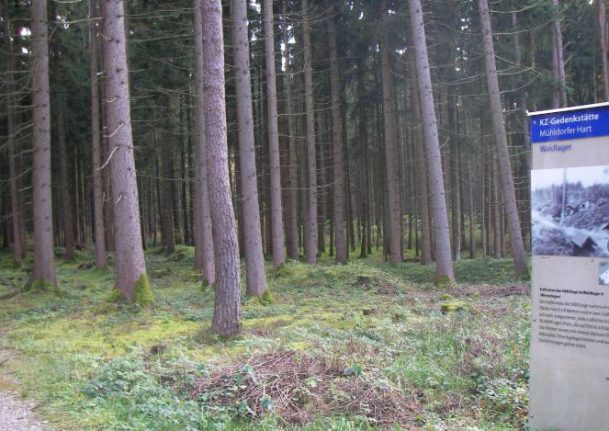 At least 2,200 prisoners, many of them Hungarian Jews, died in the miserable conditions at the Mühldorfer Hart camp and were buried on-site in a mass grave.

More than 70 years after the war ended, the state of Bavaria has finally put up a memorial of standing concrete slabs with photographs and text on the site's grim history.

A concrete path has also been laid, leading visitors through the vast area's work camp to the mass grave.

“I am satisfied that finally, after so many years, we can remember the suffering of these men and their deaths in the middle of the forest,” said Franz Langstein, who heads the association “For Remembrance”.

The group has fought for 20 years for the memorial to be built, he told AFP.

“Why so long? That's a difficult question,” said Langstein. “I think it has to do with the fact that a certain generation needed time before looking back.”

Some 10,000 detainees were forced to work in “inhumane conditions” in the camp from the summer of 1944 until April 1945, according to Langstein.

Their task was to construct a factory, including a concrete bunker, where the fighter jets which would be deployed for Adolf Hitler's planned “ultimate victory” were to be built — but the plant was never finished.

Conditions were so poor that “by the autumn of 1944, 10 to 20 people were dying each day… during winter, the number rose to 40 people,” said Langstein by the newly inaugurated concrete panels that recount the history of the camp through witness accounts and images.

“At the heart of this idyllic forest, we see what people are capable of doing to others, without any feeling and by telling themselves that 'anyway, these are just Jews',” said Langstein, as birds chirped.

Considered as an annex of the better known Dachau camp, the site was evacuated on April 28th, 1945.

After the war, a mass grave with the remains of 2,200 people was uncovered.

Today, few traces of the concentration camp remain, and joggers or hikers pass through the woods with little knowledge of the site's gruesome history.

Only partial ruins of the bunker, which was meant to have eight storeys, four of them underground, are still visible.

And the trees at the site of the mass grave have all been chopped down.

“These stories of persecuted minorities, Jewish or other minorities, they are everywhere in the history of mankind,” said Langstein.

“And this memorial is here to remind us, and to remind the coming generations, that we always have to stay on our guard.”