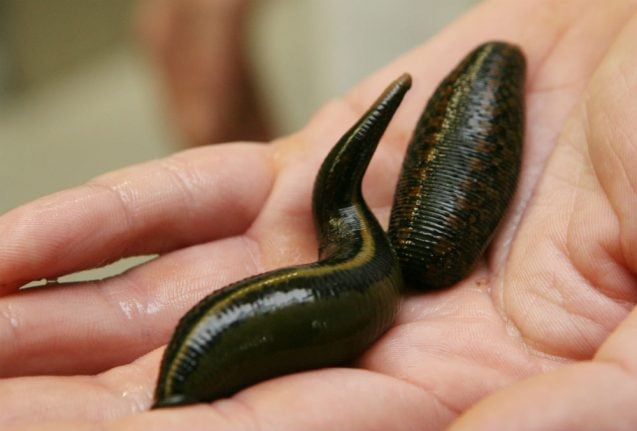 Leeches at a lab in Potsdam. Photo: DPA

A 63-year-old female traveller arriving from Turkey was stopped when her luggage went through security, and customs found a plastic bottle containing the long and slimy worms.

She had brought the 21 leeches along to help her with her knee pain, according to the police report.

Some clinical trials show that leach therapy can be a suitable treatment for the common joint disease osteoarthritis.

The animals were confiscated from the woman as she wasn’t able to show the proper export and import permits required to let them into Germany. She will likely face a fine.

After close examination, it was determined that the worms were a certain type of Hungarian leech which contain a typical 34 segments.

The species is listed as “particularly protected” on the European Union Species Protection Ordinance and the Convention on International Trade in Endangered Species of Wild Fauna and Flora.

“Over and over again my colleagues at Hamburg Airport come across live animals, plants or goods that travellers take with them without considering whether they are protected,” said a customs spokesman.

“We recommend holidaymakers leave behind everything that lives in their holiday countries. Or, as in this case, find out precisely about the import and export regulations,” the spokesman added.