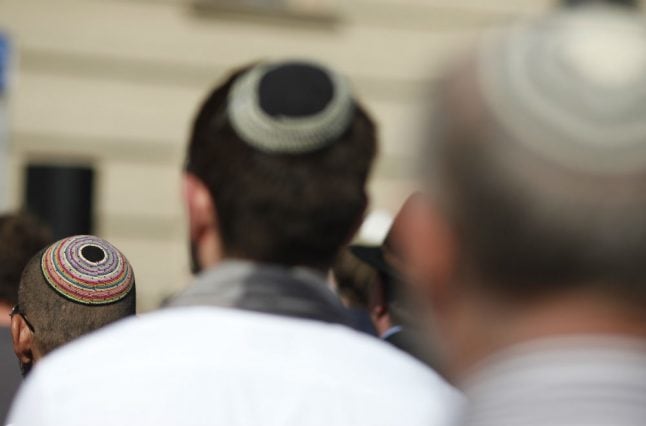 Photo: DPA
Police said the tiny demonstration in Neukölln district, the heart of the capital's Muslim community, ended early after the trio were shouted down by “loud and emotional” opponents and feared for their safety.
The rally was cancelled after just 15 minutes, said Levi Salomon of the Jewish Forum for Democracy and Anti-Semitism in an emailed statement that included video footage of a young man snatching an Israeli flag and running off, and of another spitting at a demonstrator.
Germany, which has been rocked by a series of ugly anti-Semitic incidents, on Wednesday saw a series of rallies with hundreds of marchers in various cities to show solidarity with Jews.
Elsewhere in Berlin, some 2,000 demonstrators rallied at a “Berlin Wears Kippa” event where Jews and non-Jews wore the traditional skullcap in a shared show of defiance.
Speaking at the rally, Berlin's Jewish community chairman Gideon Joffe warned that the growing threat meant “it's five minutes to midnight”, adding that “we have to be careful”.
The head of the country's Central Council of Jews, Josef Schuster, demanded “100 percent respect” for Jews as well as for Muslims, homosexuals and people of “all skin colours”.
SEE ALSO: