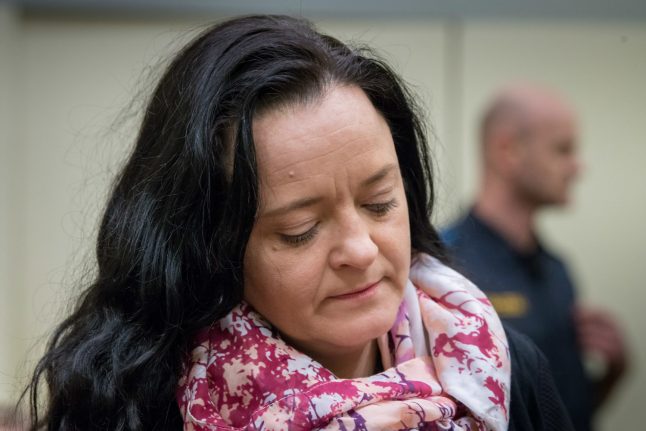 Five years after Zschäpe, 43, first entered the dock, her lawyer Hermann Borchert called the case against her “inadequate” and insisted she was not involved in a string of racist murders, bombings and bank robberies committed by the clandestine cell.

Prosecutors accused Zschäpe of complicity in the bloody crimes carried out by Uwe Mundlos and Uwe Boehnhardt, the two gunmen of the self-styled National Socialist Underground (NSU) who died in an apparent 2011 murder-suicide.

Borchert placed the sole blame on the two men, who had been in a love triangle with Zschäpe since their teenage years and who between 2000 and 2007 shot dead eight men with Turkish roots, a Greek migrant and a German policewoman.

Zschäpe, who faces a maximum term of life in jail, has claimed she was an unwilling and horrified bystander to the crimes, not a strong-willed and active participant as charged by prosecutors in the Munich trial.

Borchert told the court that the two men had been the NSU's dominant force and that the particularly volatile Boehnhardt had been described by his own father as “a ticking timebomb”.

The lawyer said it was “absurd to believe that the two Uwes cowered before my client”, given that they were cold-blooded enough “to simply shoot people in the face”.

It was only after the two men's deaths in 2011 that Germany awoke to the news that the killings, long blamed on migrant crime gangs and dubbed the “doner (kebab) murders” by police and media, were in fact committed by organised fascists.

Also in the dock are four men accused of having supported the NSU with weapons, identity papers, cash or other support during their string of 10 murders, two bombings and 15 bank robberies that helped finance their underground lives.

MUST READ: The German spy services' dubious ties to the neo-Nazi scene

Zschäpe, when she learnt of the two Uwes' deaths after a bungled bank heist, torched their common home, dropped her two cats with a neighbour and fled.

While on the run, she mailed to media and Muslim community groups DVDs in which the NSU bragged about the murders in a macabre confession video set to a Pink Panther cartoon theme.

Federal and state-level parliamentary committees spent years trying to understand what went wrong, including the murky role of paid undercover informants inside the rightwing extremist subculture.

In the Munich trial, prosecutors have focused on Zschäpe, charging she was an active NSU member who aided the crimes by covering the men's tracks, handling finances and providing a safe retreat.

Zschäpe has insisted that she was involved “neither in the planning nor the execution” and had only stayed with the two men because was financially and emotionally dependent on them and feared going to jail.

Describing their shared teenage days in the neo-Nazi youth scene of their post-reunification east German home town of Jena, she told the court that “those two were my family”.