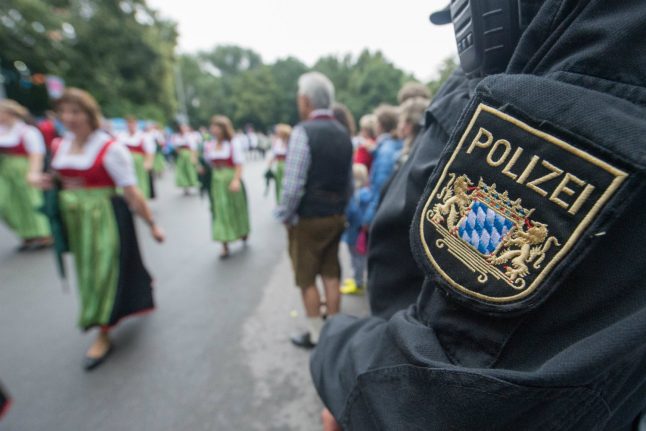 Police and emergency workers have been repeatedly attacked in Munich's English Garden. Photo: DPA
Munich’s English Garden has seen multiple instances of young people attacking emergency services personnel over the past week.
On Saturday evening, Munich firefighters were called to the Garden’s popular Monopteros Hill, where a park goer was unconscious.
The crew of an ambulance and an emergency doctor made their way to the patient, but on the way back to the ambulance were attacked by more than 15 young people gathered in the area, who began slinging insulting and throwing bottles at the firefighters and ambulance crew.
According to Munich paper TZ, some of the crowd also climbed on top of the ambulance and shook the vehicle violently from all sides. The rioting group further attempted to tamper with the fire trucks and dismantle machinery found on the vehicle.
The police were called to intervene to protect emergency services personell from further attack, where they were also heckeled by the on-lookers. The unconcious man was later taken to the hospital, where he was treated for alcohol poisioning.
Fire department spokesman Stefan Kießkalt claimed to be dismayed: “We come to help and are then insulted and attacked. We can't understand that.”
Just a week before, there was another major police operation at Monopteros, when a party planned on Facebook with over 800 guests escalated into attacks on police, reported newspaper Süddeutsche Zeitung.
Callers allegedly reported fights among larger groups of young people attending the party within the English Garden. But when the officers arrived, the fights turned out to be a trick to lure officers into an ambush.
The police called for more reinforcements and were forced to use truncheons to drive away about 200 angry rioters. Following this incident, three 17-year-old students and one 18-year-old are under investigation for attacks on police officers, and two 16 and 17 year old girls are accused of insulting the police.
Over the past few weeks, police have been increasingly present in the Munich's English Garden, especially on weekends. Two police dogs were also present on both Saturday evenings.