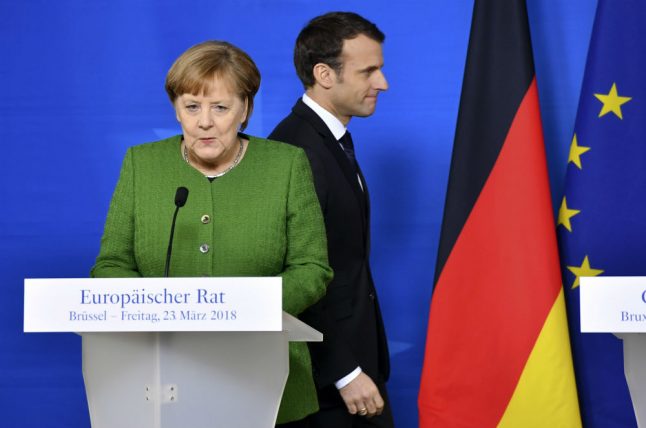 Angela Merkel and Emmanuel Macron at the EU summit in March. Photo: DPA

Less than a year after his stunning election win on a pro-EU platform, Macron's hopes of pushing through his bold post-Brexit reforms with Chancellor Angela Merkel by his side are facing a cold dose of reality.

“Macron's European initiative is as dead as a dormouse,” Der Spiegel news weekly wrote ahead of the Frenchman's visit to Berlin Thursday, a chance for both leaders to take stock of the stalled reform process.

The talks come as differences between the neighbours were thrown into stark relief in recent days, when Berlin — but not Paris — chose to sit out the biggest Western intervention yet in the Syrian war.

And while Macron laid out his lofty reform goals in a passionate speech to the European Parliament, Merkel's own party publicly pushed back against his proposals for a eurozone budget and an expansion of the EU's bailout fund.

Merkel nevertheless said she remained convinced both sides would find “common solutions” before an EU summit in June.

“Things are moving at a snail's pace, if at all,” said Stefani Weiss, an analyst at the Bertelsmann Foundation think tank.

“I think we'll end up with only very modest reforms.”

Topping the agenda on Thursday will be talks on bolstering European defence cooperation, with Macron calling for a joint intervention force and joint military doctrine.

Berlin and Paris agree that Europe must be able to stand alone on defence in the face of US President Donald Trump's isolationist tendencies — but it remains to be seen how far Germany is willing to go.

The air strikes against the Syrian regime last weekend by the US, France and Britain, in response to a suspected chemical attack, were carried out without the EU's biggest and most powerful nation.

Although Merkel supported the intervention, she ruled out any German participation, sparking debate about Berlin's leadership role.

“When people are being slaughtered, the time comes to take action,” former German defence minister Karl-Theodor zu Guttenberg told Bild newspaper, accusing Merkel of “letting others do the dirty work”.

But observers say the veteran chancellor, who has just begun her fourth term with a much-reduced parliamentary majority, was playing to the domestic gallery.

As the instigator of two world wars, Germany abhors the idea of getting involved in armed conflicts and Merkel anyway needs parliamentary approval before she can agree to any deployments.

Although the country has in recent years cautiously stepped up its role in multinational missions abroad, including alongside French troops in Mali, Germany remains reluctant to resort to military force.

Years of underfunding have also left Germany's military equipment in a woeful state, leaving allies to privately grumble over the nation's lack of combat-readiness.

Another great stumbling block to Macron's European dream is growing scepticism in Berlin about some of his flagship plans for overhauling the eurozone.

Most of the opposition has come from within Merkel's own conservative camp, deeply wary of any possibility that debt might be pooled or German taxpayer money handed over to spendthrift neighbours.

Lawmakers from Merkel's CDU/CSU bloc this week released a joint paper laying down strict conditions for the proposed transformation of the bloc's bailout fund into a European Monetary Fund that can act as a “lender of last resort”.

The document includes a potentially deal-breaking insistence on getting each member state's parliament to sign off on the fund's creation, a lengthy process with a high potential for failure.

Merkel's party also dismissed Macron's plan for a separate investment budget for the 19-member single currency area, saying it was not “a top priority” when the bloc is still grappling with how to plug the hole that Britain's departure will leave in the wider EU budget.

“I don't see why I should place Macron's happiness at the heart of my policies,” said top CSU lawmaker Alexander Dobrindt.

But a senior French official, speaking on condition of anonymity, said he believed the German position would soften.

“Are they jumping for joy in Berlin at the thought of a eurozone budget? Probably not,” he told AFP.

“But we need it, and everyone agrees there's been insufficient investment in the eurozone, including Germany.”