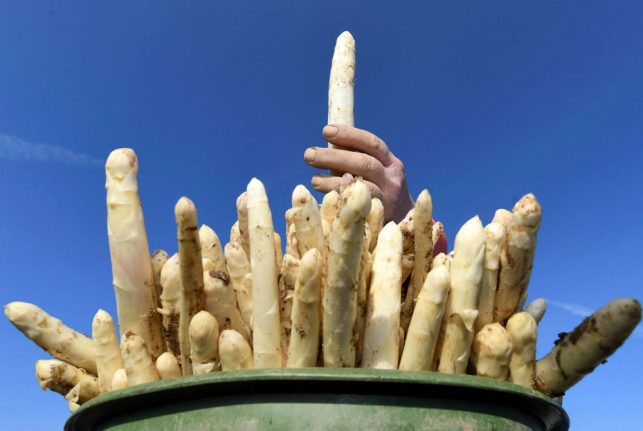 But in order for the veggie which Germans go bonkers over to reach the stores, they have to be harvested in a particular way.

The photo below shows a harvester in Sünching, Bavaria, tending to the asparagus field covered in film last week. Transparent film is typically used during the start of the harvest to help the asparagus grow.

Meanwhile in Hesse, Minister-President Volker Bouffier launched the start of the season on Thursday with Asparagus Queen Sarah I.

In Munich, a vendor at Viktualienmarkt demonstrates how to peel white asparagus. Unlike green asparagus, white asparagus has skin which needs to be peeled; many supermarkets do the work for you and sell them already peeled.

In Elstal in the state of Brandenburg, countrywomen strike a pose in an asparagus field. In the Brandenburg town of Beelitz, where asparagus has been grown since 1861, a celebration was held at the start of the season.

The venerable veggie is also being harvested in Lower Saxony. Pictured below in Fuhrberg is a crate of aspargus next to a harvest worker's tools.

Even in the north of the country up in Mecklenburg Western-Pomerania, the Edelgemüse or “the noble vegetable” is being grown. An image from above is captured in Wöbbelin showing a field of rows and rows of aspargus.