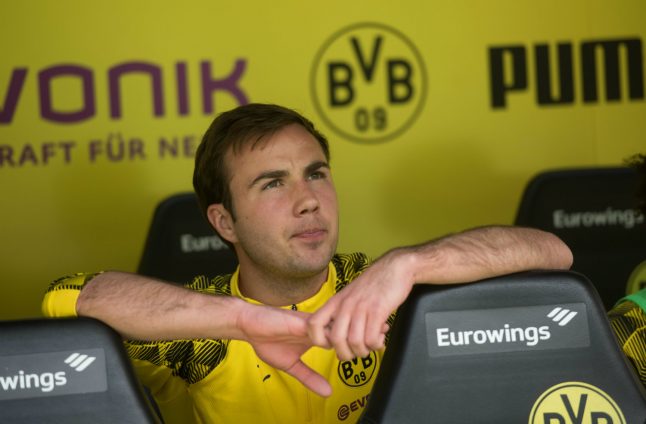 Götze is struggling for form, but hopes to feature for third-placed Borussia Dortmund in Sunday's crunch Ruhr derby at Schalke, who are second in the Bundesliga.

The 25-year-old has only played two of Dortmund's last four league games having also been left out of Germany's draw with Spain and defeat to Brazil in last month's international friendlies.

Just two months before the World Cup in Russia, the clock is ticking to secure a spot in the squad to be named on May 15th.

“I know that the next five games are very important to me, but they are not alone in determining whether I go to Russia or not,” Götze told German daily Bild.

“The coach (Löw) has known me for many years and knows what qualities I have.

“I have not lost these, on the contrary I have matured as a personality through the experiences I have had in recent years.

“I'm now 100 percent focused on the last five games, so Dortmund can qualify directly for the Champions League.”

Götze scored the winning goal in extra-time at the Maracanã in Rio when Germany won the 2014 World Cup final with a 1-0 win over Argentina.

He came off the bench with Löw's advice – “show you are better than Messi” – ringing in his ears, his chest and volley moments later gave Germany a fourth World Cup title.

However, Götze has had a miserable time in the last four years.

During an unhappy spell at Bayern Munich he struggled for matches under Pep Guardiola.

Then he suffered a rare metabolic disorder last year after moving back to Borussia Dortmund in 2016.

The attacking midfielder has scored only twice in 19 Bundesliga games this season, the last of which came in February.

He was replaced at half-time after a poor display in the goalless draw at Salzburg last month in Dortmund's last 16, second-leg, exit from the Europa League.

“I think everyone who has won a World Cup and has played 70 internationals wants to be there,” said Götze.

“I am sure that with my qualities, I can help the team win the title again.”

Götze's darting runs into the box and defence-splitting passes were a feature when he helped Dortmund win the German league title in 2011 and 2012.

He was just 19 when he scored his first Germany goal in a friendly win over Brazil in 2011 and Löw dubbed him a “wunderkind” — a talent for the future.

However, Götze often struggles to live up to his billing as a 'World Cup winner' and has taken flak accordingly.

Ex-Bayern coach Felix Magath sees him as “overrated” since Brazil 2014 and even Dortmund chief executive Hans-Joachim Watzke admitted “something” is currently missing in Götze's game.

“I've got used to it somehow, but still it's not nice to hear,” Götze said of the criticism.

“However, that also has to do with expectations and, please believe me, I always set myself the highest goals. I am also very critical of myself.”

READ ALSO: How to pick a German football team that perfectly suits your character